Clashes break out between migrants, refugees and police on Mytilene

Fights broke out between groups of refugees and the police on Mytilene on Sunday. Early on Sunday morning hundreds of 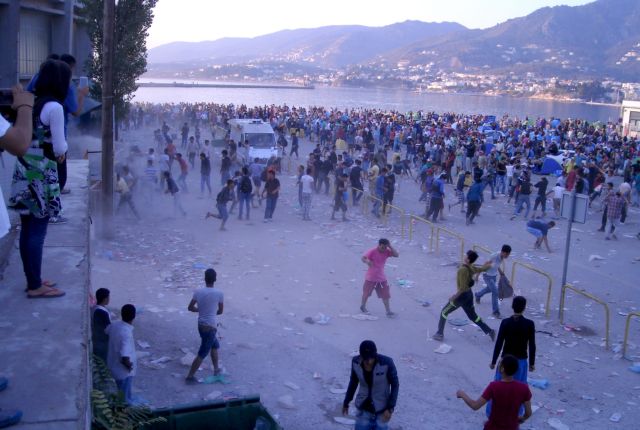 Fights broke out between groups of refugees and the police on Mytilene on Sunday. Early on Sunday morning hundreds of Afghans attempted to board the Eleftherios Venizelos ferry boat, without tickets or having gone through the registration procedures, prompting the intervention of the riot police.

Clashes later broke out at the Kara Tepe camp that has been set up. About half hour after the registration of Syrian refugees began, another group of migrants demanded that they be documented first. In the clashes that broke out two Coast Guard officers and three migrants were injured.

Many more who where caught up in the scuffles, primarily women and children, experienced breathing problems from the commotion on the island’s port and were taken to the local hospital for first aid. The Eleftherios Venizelos departed from Mytilene at 7 in the evening with about 2,500 on board. A further 400 migrants and refugees later boarded the Ariadne ferry boat for Piraeus.

About 15 minutes later they three a second bomb against another family that was camping in a park, however they missed their target. Luckily a CCTV camera caught them red –handed and they were promptly arrested. The two have reportedly confessed and will be facing felony charges. It appears that the 17-year-old had constructed the Molotov cocktails.