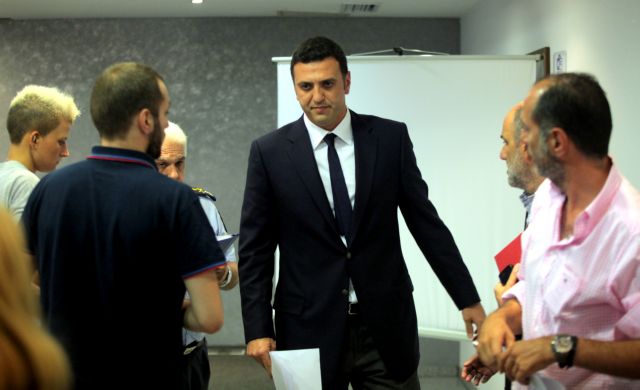 The Minister of Public Order Vasilis Kikilias was visited on Tuesday by a group of SYRIZA officers in order to discuss a number of issues related to immigrations.

The group, which was comprised of MPs Katrivanou and Tsoukalas, along with Ioanna Kourtovic of the refugee and migrant social support network and Eleni Spatha of the lawyer group for the rights of immigrants and refuges, focused on the controversial detention of migrants beyond the 18-month period.

This measure has been found to be illegal in 30 different administrative court decisions, due to the extensive detention as well as the appalling detention conditions, lack of hygiene and medical care. Greece is also facing serious fines from the European Court of Human Rights.

The SYRIZA officers compared the recent explosion of immigration to Greece to the refuge wave of 2001, due to the destabilization in North Africa and the Middle East. The group argued that while no single European country can manage the immigration and refugee issue alone, this should not legitimize practices such as pushing migrants back across the border, detaining migrants in appalling conditions and delaying asylum applications.

Finally, the SYRIZA group informed the Minister of recent violent acts carried out by groups of Golden Dawn supporters in Marousi and Patisia, as well as the presence of far-right enclaves in various state mechanisms.