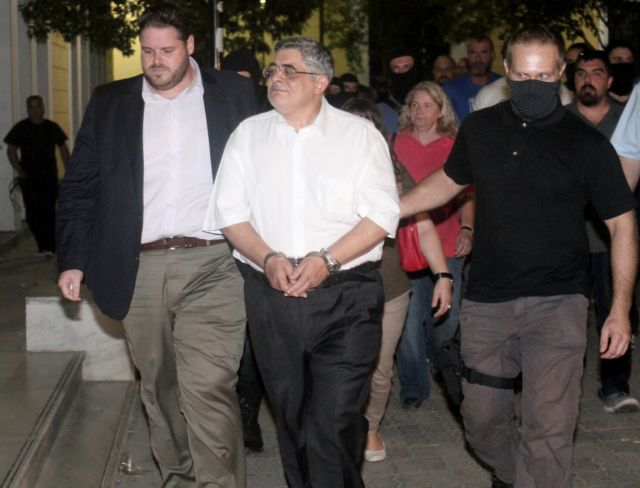 Golden Dawn’s de facto leader general secretary Nikos Michaloliakos will testify on Wednesday, at the request of his defense attorney, while his second-in-command, Christos Pappas is schedule to testify on Thursday.

The first three of the Golden Dawn members who were also arrested over the weekend will begin their pleas on Tuesday at 10:30 and will continue over the next few days. Most of the defendants are expected to testify on Wednesday.

A group of about 50 Golden Dawn supporters gathered outside the courts, with riot police units stationed around the court buildings to prevent any disturbances. One of the three, Dimos Frangakis, denied any relation – organizational, ideological or otherwise – to the ultra nationalist party and was released on bail, on condition that he does not leave the country.

His lawyer Athina Harvalakou-Glyka noted that her client “denied any relation to the organization, not just as a member but as a voter too. The only evidence implicating him is a telephone call from a co-defendant relative three hours before the [murder of Fyssas]. I am glad that the case is handled by two capable judges who are not investigating beliefs, but just the facts”.

Based on the latest information, the prosecution appears to have the necessary evidence to commanding roles, in a punitive sense to all of the Golden Dawn MPs who have been arrested, aside from party leader and Michaloliakos.

The prosecution’s evidence suggests that all six of the arrested Golden Dawn MPs and at least two members had a defined leading role in the party. More importantly however, the evidence can be used to redefine Golden Dawn as an established criminal organization, which will be critical in determining how the MPs will be handled during criminal proceedings.

The prosecution issued warrants for the arrest of nine more individuals, who have yet to be located and detained for questioning.