The absence of a national strategy for industry was emphasized by representatives of large industries to Ministers K. Skrekas and N. Papathanasis at an event of Hellenic Production and the Hellenic Aluminum Union. 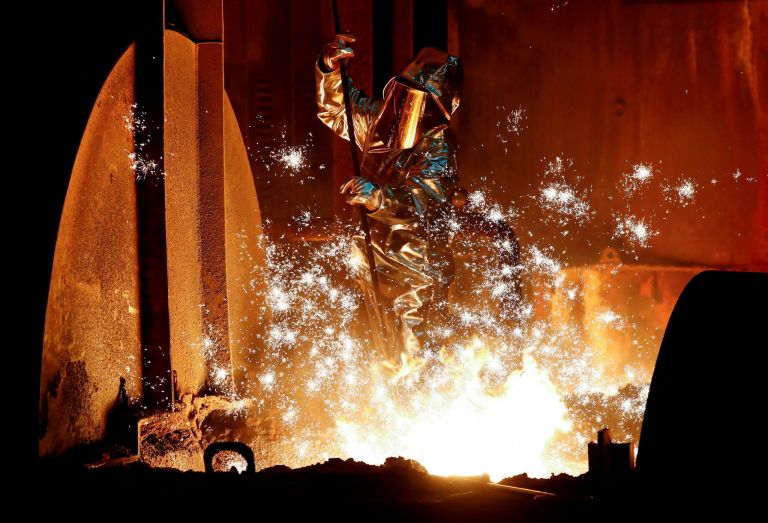 With one aluminum foundry closing in Europe due to high electricity and gas prices, Greek industries are calling on the government and Brussels to take immediate measures to reduce the energy costs that inflate their production and operating costs.

During an online event co-organized by “Hellenic Production – Council of Industries for Development” and the “Hellenic Aluminum Union”, representatives of the country’s heavy industry described the competitiveness problems they face from the explosion of energy costs and presented specific proposals. The Minister of Environment and Energy Costas Skrekas and the Deputy Minister of Development and Investment Nikos Papathanasis participated in the discussion and they accepted their requests.

The economic environment in Europe for heavy industry and specifically for the aluminum industry is suffocating.

Speaking at the event, European Aluminum CEO Gerd Goetz described in bleak terms the suffocating situation in Europe’s major aluminum industries: “Electricity bills have risen by 300%. “Large foundries are being forced to close and Europe has lost 700,000 tons of aluminum production in the months of the energy crisis, 30% of primary production.”

In turn, George Mentzelopoulos, president of the Hellenic Aluminum Union, stressed the effects of the increased production costs faced by companies in the sector. He praised the government’s aid policy, but stressed that “these measures alone are not enough”.

Nikos Keramidas, Director of European and Regulatory Affairs at Mytilineos, pointed out the contradictions of European energy policy and the green transition: “The EU stopped researching for gas fields, increased fuel imports and at the same time that it wants to become energy independent by turning to RES stopped producing panels for photovoltaics and started importing them from China. “Thus, from a monopoly of natural gas, it passes to the monopoly of RES equipment from China”, the Mytilineos executive characteristically described, emphasizing that “the EU climate policy suffers in design “. He also spoke about the tragic effects on the European aluminum industry, saying that “while 10 years ago China held 10% of world production, now it has reached 60%”. As Mr. Keramidas explained, big countries such as China, Brazil and Australia have decided to continue emitting gaseous pollutants for many years, at a time when Europe alone has set big goals to reduce them.

The absence of the national strategy in the industry was underlined by the vice president of Hellenic Production and CEO of “Epilektos SA” Euripides Dontas: “Unfortunately, the national strategy for industry is missing. We need a framework where the rules do not change. Once upon a time, there were 100 textile factories in Greece and now there is only one left, ours. And it’s sad. ”

Alumil CEO George Mylonas followed suit, saying in turn that “there is no national strategy” and citing Poland as a business example: “On the contrary, in our country we seek to develop photovoltaic parks to meet the energy needs of companies with cheaper energy, but the power distribution network does not have the appropriate infrastructure.”

Eleni Koliopoulou, president of the Association of Industries of Thessaly and Central Greece, raised the issue of financing, while the president of the Union of Industrial Energy Consumers, Antonis Kontoleon, urged the competent authorities to establish the obligation of generators to have 25% of their production. , so that the latter provide more competitive energy.

The dangers for the Greek economy

At the same event, the general director of Foundation for Economic & Industrial Research (IOBE), Professor Nikos Vettas, described the positive image of Greek industries. He focused on the dynamics of exports but also on the gradual increase of their investments.

However, he took care to point out, on the one hand, the risk to the country’s fiscal situation in the event of a relaxation of the state aid framework, and on the other, the ongoing burden on the economy from the effects of the deficit on the pandemic and the consequences on the Ukrainian front: financing the economy “.

The Minister of Environment and Energy Costas Skrekas and the Deputy Minister of Development and Investment Nikos Papathanasis were representing the government.

Mr. Skrekas, after emphasizing the policy of aid to households and businesses to deal with the increases in energy, pledged for the quick liquidation of the Special Emission Reduction Fee, which will return to the industry 120 million euros, but also for the notification of the Greek proposal to Brussels for the compensation of pollutants that will strengthen businesses with another 120 million euros.

He also announced a series of interventions for the unimpeded access of industries to RES for the purpose of self-consumption of energy and net metering.

Responding to criticism concerning the lack of a national strategy in the industry, Mr. Papathanasis listed the laws on strategic investments, the development law and the simplification of business licensing. As for the development law, he said that in the next two months, the special schemes for the financing of investment projects will be activated.