Polakis to face Parliament’s ethics committee after battle royal with Georgiadis, who will sue him

Development Minister Adonis Georgiadis announced that he will sue Polakis over his continuing allegations against the development minister regarding kickbacks, even after the case was shelved. ‘Whatever he may say, I will answer only in court,’ the minister declared. 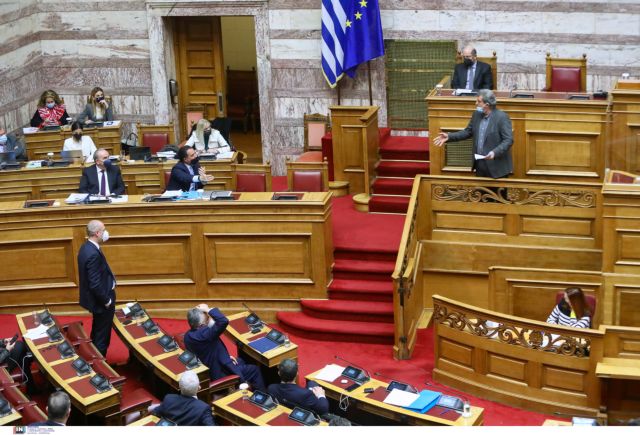 Parliament Speaker Kostas Tasoulas has referred SYRIZA MP Pavlos Polakis to the legislature’s Ethics Committee in the latest episode in the vendetta between the SYRIZA MP and Development Minister and New Democracy vice-president Adonis Georgiadis over charges that the latter as health minister received kickbacks from the pharmaceutical giant Novartis.

The tumult came just days after the Greece judiciary shelved Georgiadis’ case for lack of evidence. Georgiadis submitted to Parliament the judiciary’s report regarding the shelving of the case, declaring that it is a “hymn” to his tenure as minister.

‘Leader of the anti-vaxxers’

Because of Polakis ambiguous position on the safety of COVID-19 vaccines, Mitsotakis called SYRIZA’s former alternate health minister the leader of Greece’s anti-vaxxers.

Polakis, a surgeon, delayed being vaccinated until September, supposedly due to concerns over the safety of COVID vaccines, and only after being pressured by former PM and main opposition SYRIZA leader Alexis Tsipras.

The ruling party and a number of political analysts have said that Polakis’ stance was designed, with Tsipras’ blessings, to lure anti-vaxxers to the SYRIZA camp.

During yesterday’s debate on the government’s economic development bill, Polakis took the podium for nearly an hour, during which he unleashed a vitriolic attack against Georgiadis, and refused repeated calls from the parliament’s deputy speaker who was chairing the session – who in the end postponed the debate until today – that he step down from the podium.

For his part, Georgiadis submitted to Parliament the full judicial report on the shelving of the case against him regarding Novartis.

He also lambasted newly elected centre-left Movement for Change leader Nikos Androulakis for not defending two of his own party’s cadres – former deputy PM Evangelos Venizelos and MP Andreas Loverdos – who were also investigated by the judiciary over the same case. Venizelos’ case has been shelved but Loverdos’ has not as yet.

Georgiadis announced that he will sue Polakis over his continuing allegations against the development minister regarding kickbacks, even after the case was shelved.

‘Whatever he may say, I will answer only in court’

Georgiadis said in Parliament today that, “I shall not again respond to Pavlos Polakis, whatever he may say. The only discussion with him will be in court, in the context of my lawsuit against him.”

‘What else does SYRIZA want to stop saying I was bribed?’

Addressing Parliament after Polakis today, Georgiadis said that the situation must be handled seriously, and that CCTVs in Parliament recorded his demand that Polakis’ speech not be interrupted.

“Parliament is a place where views clash. I have nothing to fear from anything Mr. Polakis says,” Georgiadis noted.