Editorial: A message of hope from volunteer nurses

Now almost every family can share a tragic coronavirus story. Public hospitals are in a tragic situation. Doctors and nurses confess that they have reached the point of exhaustion. 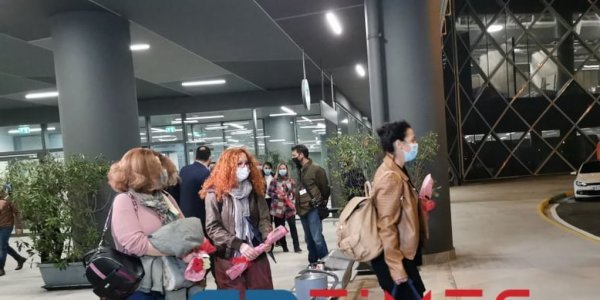 The reports and images that reveal the impact of the COVID-19 epidemic in the regions of Central Macedonia and Thessaly are extremely alarming and leave no doubt about the intensity and depth of the epidemic.

Τhe cities of Thessaloniki, Serres, Drama, Veria, Edessa, Aridaia, Yannitsa, Kilkis, and Katerini have been hit hardest but not far behind are Larissa, Volos the other cities of the flatland of Thessaly are being battered by the epidemic as one can plainly see in the pictures of freshly dug up graves.

Now almost every family can share a tragic coronavirus story. Public hospitals are in a tragic situation. Doctors and nurses confess that they have reached the point of exhaustion. Healthcare facilities are waging an uphill battle. They are operating beyond capacity as restrictive measures have been unable to stem the furious spread of the disease.

There is a great danger of the second wave of the epidemic spinning out of control and besieging the entire country.

Attica is already being pounded and the moment at which the hair-raising sounds of ambulance sirens will be drowning out all others is fast approaching.

We have reached the point where there is absolutely no room for postponements or even a hint of complacency.

The PM, the government, and competent ministers this time have a duty to do what they must in a timely manner. Errors and reservations are unpardonable. Negligence will not be tolerated. Insistence and decisive actions are mandated.

Right now all public and private forces must be mobilised to protect public health and the lives of citizens.

Wrangling and negotiating the demands and claims from the private health sector cannot be accepted under any circumstances.

Those who benefited greatly from the economic growth during the decades before the outbreak of Greece’s great depression have a duty to actively and uncomplainingly contribute and participate in the effort to check this unprecedented public health crisis.

The recent refusal of the owners of private clinics in Thessaloniki to offer up their facilities in order to confront the public health emergency is anti-social and incompatible with the Hippocratic Oath which is supposed to be the underpinning of their operation.

In conditions of war against a fierce and unrelenting epidemic there is no excuse for refusing to offer their services to society in its entirety.
This is all the more true when dedicated nurses (photo) from Crete, Ioannina, and Argos, leaving behind their families and homes, are rushing without reservation to volunteer their service to besieged Thessaloniki hospitals.

Their example should inspire and guide all parties involved as they bear what is perhaps the most optimistic and hopeful message in a very dark period.

It is a message of personal sacrifice, solidarity, and humanism which we all pretty much felt had been lost during a long spell of absolute individualism and collective alienation which was predominant over many decades.