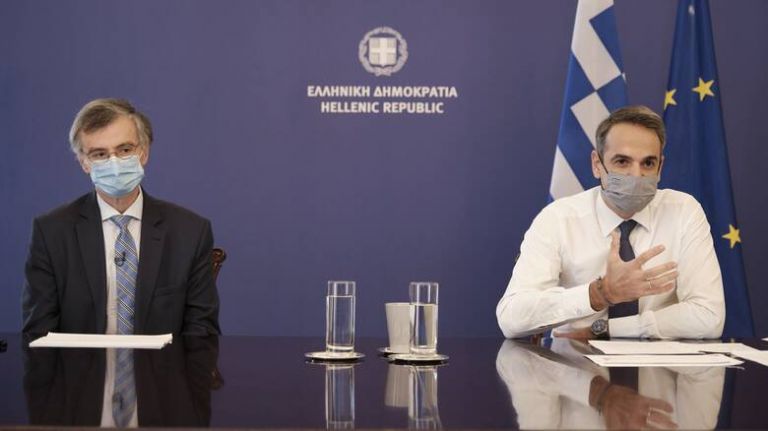 ‘I want to show that the decisions are guided by the epidemiological data…the scientific data should not be an object of controversy,’ the PM said in announcing the lockdown.

Mitsotakis also announced a package of economic relief measures to temper the measure’s serious blow to the economy.

He said he took the grueling decision because any delay would have a disastrous effect with a major death toll.

The move has triggered a severe backlash from a host of professions and establishments from restaurants to shop owners.

The PM appeared with Epidemiology Professor Sotiris Tsiodras – whom he repeatedly referred to by his first name in an apparent effort to draw on his popular approval from the first televised lockdown briefings last spring.

Tsiodras won kudos from the international press on his [along with an expert committee] handling of the first wave of COVID-19.

Until now he has made all nationally televised statements regarding the pandemic on his own.

Fielding questions sent in by journalists and read out by government spokesman Stelios Petsas the PM answered the question of whether he believed the government had made any errors in handling the epidemic.

He conceded that there was a delay in addressing the rapid spread in Thessaloniki and that, “After the first wave we all wanted to believe that we were finished [with the COVID-19 crisis

Experts in Greece and internationally, however, had been clear about their expectation of a second wave in autumn.

“ We have decided that from Saturday morning [7 November] at 6:00 am we will once again enter a horizontal regime of suspension of activities until November 30,» the prime minister said.

Regarding the reasons for taking the measures now, Mitsotakis said this was prompted «because we saw an exponential rise in cases» and in a bid to act early.

«We saw…nearly 10,000 cases in five days. We saw a significant increase in hospital admissions, of those on ventilators, in how many ICUs we were forced to use, and a bad ratio of admissions to discharges,» he noted.

«We have to stop this wave. The 50 ICU beds that we added to Sotiria Hospital [donated by the Greek Parliament], at this rate could be filled in three to four days,» he added.

Mitsotakis said that he had opted «to take drastic measures sooner rather than later.”

“ Many European countries were forced to take such measures when the epidemic had already gotten out of hand. I will not put the lives of our fellow citizens at risk,» he said.

Mitsotakis said the measures will be imposed for three weeks in order «to allow ourselves a relatively more normal December, something that will resemble the holidays in other years.»

Mitsotakis announced a broad package of economic relief measures for a variety of groups, from employees of businesses the activity of which will be suspended to an extension of unemployment benefits for individuals for whom they were to be terminated between September and December.

‘No one will be left behind’

«Our duty is to have reserves. The country has over 37 billion euros of cash reserves and nobody will be left behind. Our first priority is the most vulnerable,» he said of widespread concerns over the impact of the lockdown.
«I will focus on three additional measures. Those employees who will be furloughed in November will receive 800 euros in early December instead of the 534 euros [paid in the first wave of the epidemic] in addition to their Christmas bonus.”

A one-off 400-euro benefit will be given to the long-term unemployed who no longer receive benefits.

«Some might ask why we did not wait 10 to 15 days to see if the measures we have taken bring results… The aggressive increase in cases forces me to impose these measures now,” he underlined, noting that if the lockdown were not implemented “in 15 days the pressure on the health system would be unbearable and I can’t allow this to happen,»
the PM declared.