Within three years, Tsipras led a very small party to become one of the country’s top two parties, with a good shot at gaining power. 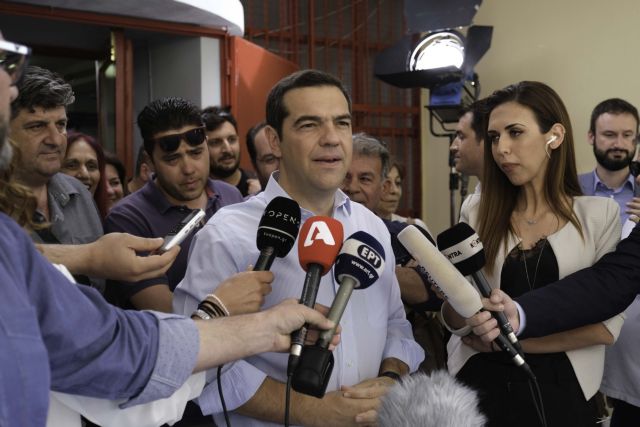 From the very start of his political career PM Alexis Tsipras was constantly gaining ground.

Until SYRIZA’s defeat on 26 May, he always scored victories, small or large.

As a very young candidate in the Athens mayoral race on the “Open Athens” ticket, he garnered over ten percent of the vote, more than double what his party was polling in national elections.

Building on that victory, Tsipras quickly climbed the rungs of the SYNASPISMOS (the precursor of SYRIZA) party hierarch and won all his intra-party battles.

Later, he managed to edge out and succeed his mentor and party leader Alekos Alavanos and led the patchwork coalition of small left-wing political groupings with SYNASPISMOS at the core that was SYRIZA.

In its first general election with Tsipras as leader, SYRIZA again had the low polling numbers of previous elections (5.04 percent).

Nevertheless, the party exhibited endurance and its support was enhanced by the economic crisis, the first and second bailout memorandums, and many social movements that took to the streets and public squares.

In the May, 2012, election SYRIZA leapt to 16 percent, and one month later it skyrocketed to over 26 percent.

Within three years, Tsipras led a very small party to become one of the country’s top two parties, with a good shot at gaining power.

Two years later, in the 2014 European Parliament election, SYRIZA finished as the top party, preparing the way for its victory in the January, 2015, parliamentary election.

What followed were the PM’s tumultuous first six months in power and the referendum (on the third bailout memorandum) which nearly blew the country out of the water with a possible Grexit.

He unabashedly reversed voters’ overwhelming rejection of the bailout deal when he realised the harm it would bring to the country and him personally.

He dumped his erstwhile comrades who opposed the memorandum which he ratified with the backing of his political opponents, whom in turn he also cut loose two months later.

He proceeded to win the September, 2015 general election, the second in less than one year.

Since then, he governed in an almost Machiavellian manner, without fearing anyone, with cunning and tricks, and by constantly dividing the Greek people.

The PM continually undermined his opponents with all possible means, legal and unethical, as occurs with all cynical rulers.

Over time, he crafted the reputation of a political magician who could always pull a rabbit out of the hat and who was an invincible Teflon leader.

Tsipras himeslf was influenced by these false impressions. He became arrogant, haughty, audacious, and aggressive.

He lost all sense of measure and at the same time he lost touch with society and reality.

He was left surrounded by the sycophants and flatterers who supposedly protect the leader by concealing the truth.

That is why the PM was flustered with the result of the 26 May election as the profile he had cultivated for years collapsed.

Now there are no more magic tricks or bright ideas.

All that is left are tensions and clashes as well as efforts to undermine him and subterranean jockeying to succeed him, things that the leader usually does not catch on to.

As the Romans said, “Sic transit gloria mundi”, thus passes the glory of the world, and you Prime Minister are not an exception.