Nearly 70 percent (69.6%) of those polled said they oppose the Prespa Agreement, but 26.5 percent, believe that the Greece-FYROM naming accord is in Greece’s interest. 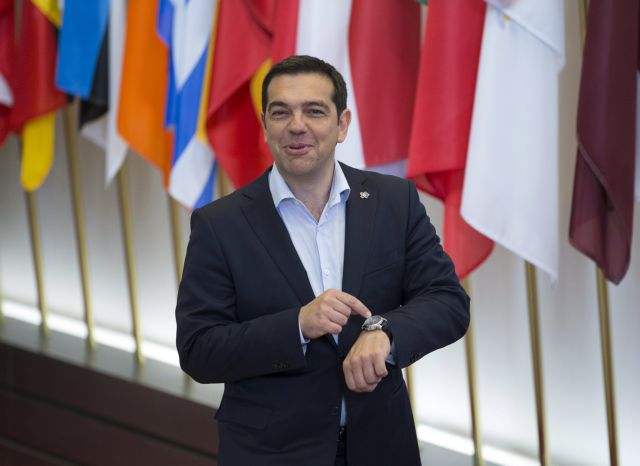 Greek Prime Minister Alexis Tsipras shows his watch while leaving the European Council headquarters on the first day of an EU-CELAC Latin America summit in Brussels, Belgium June 11, 2015. European leaders realise Greece needs a viable solution to its debt crisis that allows the country to return to growth, Tsipras said on Thursday, after talks with the leaders of France and Germany. "We decided to intensify the efforts to bridge the remaining differences and proceed, I believe, to a solution in the coming period," Tsipras told reporters after late-night talks in Brussels. REUTERS/Yves Herman TPX IMAGES OF THE DAY
Share

A new survey (conducted by the Marc polling company for the news website protothema.gr) shows that a whopping 65.5 percent of those surveyed want elections to be held right now and that the government should not to seek a confidence vote in parliament.

At the same time, the survey showed that 70 percent of Greeks oppose ratification of the Greece-Fyrom Prespa Agreement.

Moreover, 68.3 percent of respondents said that the withdrawal of Independent Greeks leader Panos Kammemos from the government was pre-planned.

The public believes (65.3 percent) that Kammenos has suffered political losses due to his recent moves, while 21.4 percent said Kammenos benefited by (ostensibly) parting ways with PM Alexis Tsipras.

Nearly 70 percent (69.6%) of those polled said that they were negative or probably negative about the Prespa Agreement.

Something over one-quarter of respondents, 26.5 percent, believe that the Greece-FYROM naming accord is or probably is positive as regards Greek interests.

‘No’ to confidence vote, ‘yes’ to elections

Asked whether after Kammenos’ withdrawal from the government they want the government to get a confidence vote from parliament or to call early elections, 65.5 percent said they favor a snap poll.

Nearly one-third of respondents, however, said they would like the government to win the parliamentary confidence vote that it has called, and 4.8 did not answer.

When asked, “Do you believe that the withdrawal of the Independent Greeks from the government was a move pre-arranged by Tsipras and Kammenos or not?” 68.3 percent responded that it was pre-arranged, and only 20.7 percent said that it was not. Eleven percent of those polled refused to respond.

The interview was conducted by telephone with calls to 824 households with male and females respondents who have voting rights, and with a multi-dimensional random sampling based on gender, age, and geographic distribution.