‘Today we are tabling the draft bill on the social dividend [a one-time handout for the lowest economic brackets]. We are giving to the weakest, with family and social criteria,’ the PM told parliament today. 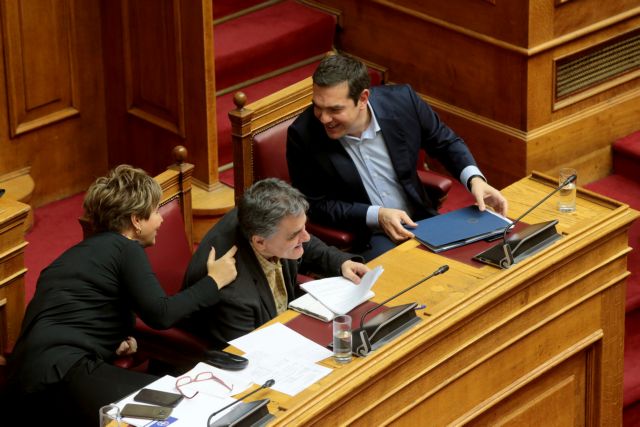 Prime Minister Alexis Tsipras told parliament today that his government is introducing relief measures for the middle class and lower economic brackets, even as he noted the successful operations of Greek Police.

Tsipras cited draft legislation tabled in parliament that determines the conditions for the reconstruction of Mati, where a deadly wildfire killed 99 people this past summer. Many have charged that the state and its services are responsible for the fire turning into a human disaster.

Noting his visit to the town yesterday, he stressed that despite the difficulties, the government has to a large degree managed to stand by the residents and to “address complex issues”.

“Today’s addendum to a bill will allow for the repair of damages, the issuance of building permits, and the total reconstruction of red buildings [that must be demolished], under terms that will not repeat the errors of the past,” the PM said.

Tsipras publicly thanked the President of Cyprus, Nikos Anasatsiadis who in a letter had informed the PM that his request for the Republic of Cyprus to contribute to the construction of a public hospital in the fire ravaged areas of Attica was approved.

“We are moving forward swiftly to the stage of implementing a plan that safely brought us to the stage we are in today, the exit from the bailout memorandums. We can design a policy that will lighten the burden [of citizens], and we have already rectified a great injustice concerning the extremely rapid deterioration of civil service special salary groups, and in the coming period the necessary funds will be disbursed,” Tsipras said.

“Today we are tabling the draft bill on the social dividend [a one-time handout for the lowest economic brackets]. We are giving to the weakest, with family and social criteria. This will come, as last year, from the performance of the economy, which overreached targets, and will initially amount to 710mn euros. The exact amounts, in accordance with revenue brackets, will be determined by a joint ministerial decision which will have been issued by Monday [2 December],” Tsipras said.

The related electronic platform to file applications for the benefit will be in operation on 3 December. The social dividend will be paid on 14 December.

Tsipras said that 1.3mn to 1.4mn households will qualify for the benefit.

Tsipras also slammed those who say that SYRIZA broke its campaign promise to abolish the ENFIA real estate, and asserted that it will be reduced by  10 percent on average, and more for the lowest income brackets.