Papaevangelou is said to have bought the homes at rock bottom prices, mainly Athens residences, at foreclosed property auctions , and then used POS terminals that he had sent to China to circumvent the capital controls. 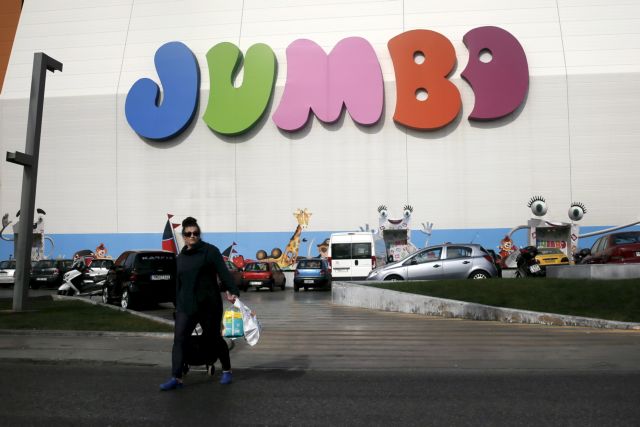 A jumbo scam is rocking Greece’s largest retail toys seller and the National Bank of Greece (NBG), one the country’s four systemic banks, both of which are sacking top executives after it became known that former Jumbo vice-president Evangelos Papaevangelou allegedly used POS terminals linked to National Bank to circumvent Chinese capital controls for Chinese clients to acquire Greece’s “golden visa” by buying from him property worth at least 250,000 euros.

Papaevangelou is said to have bought the homes at rock bottom prices, mainly Athens residences, at foreclosed property auctions , and then used POS terminals that he had sent to China to circumvent the capital controls.

None of that appears to directly implicate the company.

He reportedly bought the properties at prices far below the 250,000 euros he charged his Chinese clients, thus securing a very high profit margin.

It was after Chinese authorities detected the scam and contacted NBG that the case received publicity in Greece and attracted international media attention.

Papaevangelou has resigned his post at Jumbo, and NBG is said to be poised to sack two general directors who have reportedly been implicated in the affair.

According to a report on the Greek news site dikaiologitika.gr, Papevangelou allegedly was for years the right-hand-man of Jumbo’s main shareholder, Apostolos Vakakis, and allegedly used his profits and contacts derived from Jumbo to set up the business in China, which is a main supplier of the toy chain.

Sources say that one NBG General Director, Nelly Tzakou, has been notified that she will be leaving the bank.

Tzakou is at the very top of NBG’s executive hierarchy.

Her detailed CV on Bloomberg states: “Ms. Nelly Tzakou-Lambropoulou has been General Manager of Retail Banking at National Bank of Greece SA since July 2013. Ms. Tzakou-Lambropoulou is responsible for Retail Banking, the Branch Network and e-Business & Alternative Channels of the Bank. She is Vice President of the Board at Ethniki Hellenic Genl Ins since 2018. She served as General Manager, Group Head of Operations, Business Processes & IT at National Bank of Greece SA from 2012 to July 2013. She joined NBG in July 2007 as General Manager, Group Head of Operations & Global Transaction Services. She serves as Chairman of the Board of Directors at National Securities S.A and at NBG Bancassurance Insurance Broker S.A. She serves as Vice-Chairman of the BoD at DIAS S.A. (Greek ACH). She is Vice-Chairman Executive Committee at the Hellenic Bank Association. She serves as Director at the Athens Chamber of Commerce and Industry, Ethniki Factors S.A and also serves on Mastercard Europe Advisory Board.”

An announcement by NBG released on 31 October reads as follows:

“The National Bank of Greece (the “Bank”), in light of publications, announces the following:

The Bank, upon detection by its internal control and compliance mechanisms of unusual transactions carried out through the use of credit cards, promptly proceeded with the required actions for their termination. In that context, the Bank proceeded to the timely notification of competent Authorities.

Moreover, in implementation of corporate governance and business ethics rules, the Bank’s competent bodies were informed and the Board of Directors resolved upon the immediate taking of measures by the Management.”

Jumbo’s Board immediately accepted Papaevangelou’s resignation, which it had requested, from the post of alternate VP due to his alleged involvement in illegal transactions.

In a 31 October announcement the Jumbo company completely dissociated itself from the extra-corporate activity of Papaevangelou, who is described as a “small shareholder”.

“The Board of Jumbo AEE accepted the resignation of Evangelos Papaevangelou, who was serving as alternate vice-president and is alleged to be implicated in a case involving the purchase and sale of real estate.”

“The Board of Jumbo AEE, implementing the high standards that it applies in transparency issues, at an extraordinary meeting today, 31/10/2018, accepted the resignation of Evangelos Papaevangelou, which it had requested on 29/10/2018 for reasons of ethical order, and which was submitted on the same day for personal reasons, from the aforementioned positions that he held. It was decided that the vacated [Board] seat will not be filled, and the Board of Directors will continue its term with the same seven-member composition. Jumbo AEE continues unwervingly and unhindered the implementation of its business plan, with full transparency and high, pan-European standards.”

In a second announcement, in response to a question from the Greek Capital Markets Commission, Jumbo «denies strictly and categorically as false and unfounded, press reports regarding our possible implication in any direct or indirect manner in the alleged illegal activities of a personal company of the already resigned small shareholder, Alternate Vice President and Executive Member of the Board of Directors Evangelos Papaevangelou.»

1. The company has absolutely no knowledge or relation or link to the personal business activities of the aforementioned individual in the real estate sector or otherwise.

2. No transaction has ever been conducted through bank accounts or payment systems of the company, other than those which exclusively pertain to its daily and actual business activity.

3, In any even, Mr. Papaevangelou had absolutely no signature or authority in connection with the company’s financial transactions, as his only area of competence was responsibility for market pricing and daily running transactions with public services, authorities, and organisations.»