A segment of the Russian press sees Vartholomeos’ move to grant autocephaly to the Ukrainian Church as part of an organised US plan that aims at a breakup of the country. 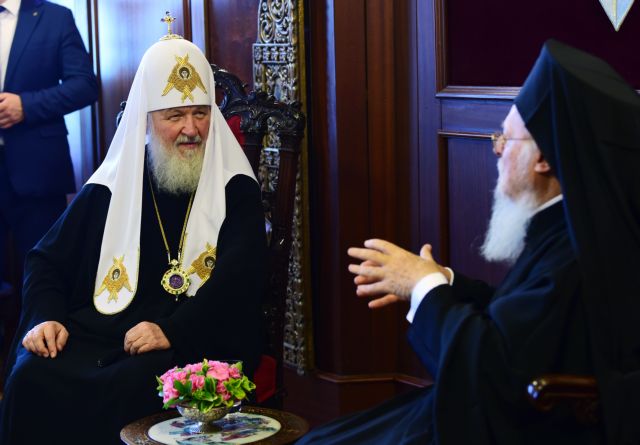 On Sunday, 16 September, 2018, the Patriarch of Moscow and All Russia, Kirill, following a decision of the Holy Synod, did not memorialise Ecumenical Patriarch Vartholomeos, the first-ranking bishop in the Eastern Orthodox Church, due to Vartholomeos’ decision to grant autocephaly, or independence, to the Church of Ukraine.

Patriarchs memorialising other patriarchs at all liturgies is a symbol of the unity of the top-ranking Orthodox churches, and the patriarchs’ names are recited in the hierarchical order of the churches they lead, beginning with the Ecumenical Patriarchate of Constantinople.

Kirill on Sunday memorialised the second-ranking Patriarch Theodoros of Alexandria and then the third-ranking Patriarch Ioannis of Antioch, and thus displayed his decisiveness in the battle over Ukraine. It is the first time that Kirill has disrupted communion with the Ecumenical Patriarchate, but his predecessor, Alexei, who was Estonian, in 1996 stopped memorialising Vartholomeos for three months, over the latter’s granting of autonomy to the Church of Estonia.

Today, Russia is not confronted with the serious political problems of that era, and Estonia does not bear the same weight as Ukraine.

Russian Metropolitan bishops, lower clergy, monks, and the media are engaging in an unprecedented war of words.
Metropolitan Hilarion of Volokolamsk, the head of the Moscow Patriarchate’s Department of External Relations (a sort of foreign ministry of the Russian Church) spoke of a “devious and deceitful plan”.

Hilarion warned that “half of the Orthodox will no longer recognise Patriarch Vartholomeos as the first [ranking bishop] in the family of Orthodox Churches”.

A segment of the Russian press sees the move to grant autocephaly to the Ukrainian Church as an organised US plan that aims at a breakup of the country, and says that the Ecumenical Patriarch himself is an organ of and paid by the US State Department.

The Conquest of Constantinople, the Patriarchate, and Stalin

Charges of heresy and of a violation of Church Canons are heard on a daily basis. Vartholomeos’ critics have also focused on his studies in Rome and Switzerland, which for some are proof that he has been “inculcated with the virus of Catholicism and is acting as if he were a Pope of the East”.

These outbursts have reached such an extent that some say that the Conquest of Constantinople saved the Ecumenical Patriarchate from the Uniate threat, the Vatican’s move to have its clergymen in Orthodox countries follow the Orthodox rite in their liturgies (masses), but memorialise the pope, under whose jurisdiction they operated.

There is even criticism of the Ecumenical Patriarchate for blocking Joseph Stalin’s efforts at the end of the 1940’s to convene a Synod of the Orthodox Churches in Moscow, with the assistance of Colonel Georgii Karpov of the NKVD – the predecessor of the KGB – who was in charge of counter-intelligence, which included religious affairs.
The Russians predict that no head of an Orthodox Church will accept the Ecumenical Patriarch’s decision to grant autocephaly to Ukraine.

It appears that Moscow’s arguments have gained ground among some in the Orthodox Church of Greece. Metropolitan Serapheim of Kythira was among the first to criticise Vartholomeos’ move, and even well-known clerics do not hesitate to adopt arguments regarding alleged direct or indirect interventions of the US, and a violation of Church Canons.