fFrmer education minister Nikos Filis publicly demanded that the government scrap the deal to sell munitions to the Saudis. 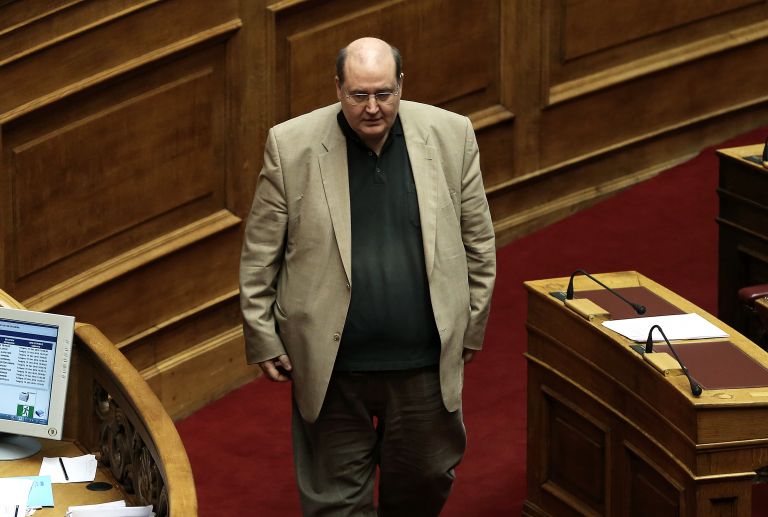 With all eyes on Monday’s parliamentary debate on Defense Minister and ruling coalition partner Panos Kammenos’ allegedly illegal actions in pursuing the sale of munitions to Saudi Arabia, the affair has caused heightened anxiety in the government and fissures in Prime Minister Alexis Tsipras’ Syriza party.

Discerning the clear snowball effect of scandal charges against Kammenos, and with Tsipras poised to defend his junior partner in the government, former education minister Nikos Filis publicly demanded that the government scrap the deal to sell munitions to the Saudis.

In order that his plea not be interpreted as an indirect admission of governmental impropriety, Filis marshaled Syriza’s leftist, pacifist image in saying that the munitions could be used in the Saudis’ intervention in civil war in Yemen.

“On Monday in parliament, the prime minister and the defense minister will answer opposition allegations of a scandal in the as yet unconcluded sale of arms to Saudi Arabia, with a government-to government agreement. I have no doubt that the responses will be persuasive and well-documented, in such a way as to leave no shadows in the case,” Filis said.

“From the point of view of the national interest and of the Left, which defends human values and ideals, there are weighty questions concerning the decision of the defense minister to sell arms to the Saudi regime, at a moment the Saudi Air Force, along with the United Arab Emirates, have been charged by international observers with involvement in the Yemeni Civil war, bombing civilians and causing a huge humanitarian disaster,” the former education minister said.

“The spread of the war and these dramatic developments largely came after the defense ministry’s initial decision to pursue the munitions sale, and after parliament had approved the sale on a multi-party basis, so all this must be factored in,” Filsi said.

At the same time, Parliament Speaker Nikos Voutsis has come under fire for hiding classified documents regarding the deal which had been submitted by Pasok MP Andreas Loverdos, citing the national interest.
Main opposition New Democracy issued a scathing statement about the parliament speaker.

“Mr. Voutsis’ unprecedented refusal to allow MPs access to documents related to the Kammenos scandal and the threats of Foreign Minister Nikos Kotzias about the penalties [prison sentence] for making them public, simply confirm that the government is in panic,” the ND statement read.

Voutsis noted that at the conference at which Loverdos submitted the classified documents, New Democracy MP Nikitas Kaklamanis was presiding.

“It was wrong for me to accept the documents,” Kaklamanis told ERT state-run television.

“These documents were never incorporated into the minutes of parliament. They were submitted to me personally, and I received them with my responsibility,” Kaklamanis said.

In the interim, the defense minister decided after the political maelstrom began to declassify the documents pertaining to the Saudi deal, so theoretically their content will be made public in Monday’s parliamentary debate.