“The desire for freedom, which is deeply rooted in the spirit of the Greek people, can… 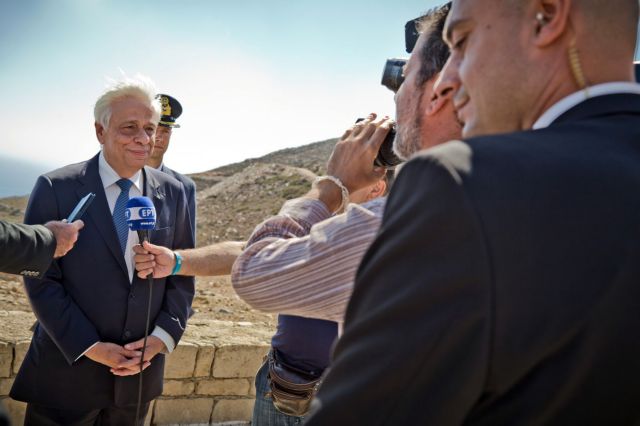 “The desire for freedom, which is deeply rooted in the spirit of the Greek people, can do wonders when the people obey to prudent organization, collegiality and unity” underlined the President of the Hellenic Republic Prokopis Pavlopoulos.

The President made the statements from Karpathos, which he visited on Wednesday to attend the 72nd anniversary of the island’s liberation from the Nazi occupation during WWII.

During his official visit to the island in the southeastern Aegean, the President attended the religious ceremony held at the Church of the Assumption and laid a wreath at the monument for the island’s liberation. The President will also attend a memorial service for Flight Lieutenant Konstantinos Iliakis in the island capital and will meet with local officials.

Later on in the day the President will visit the monument erected at Imakolata in the area of Finiki and will meet the Metropolitan Bishop Karpathos and Kasos, Amvrosios.

The President was accompanied by the Deputy Minister of Education Theodosis Pelegrinis, along with local MPs Dimitris Gakis and Manos Konsolas, the president of South Aegean regional council Thomas Sotrilis, the deputy governors of the Dodecanese Ilias Zografidis and Charalambos Kokkinos, as well as representatives of local authorities.