The city center of Athens turned into a battleground on Sunday evening, on the anniversary of the murder of Alexandros… 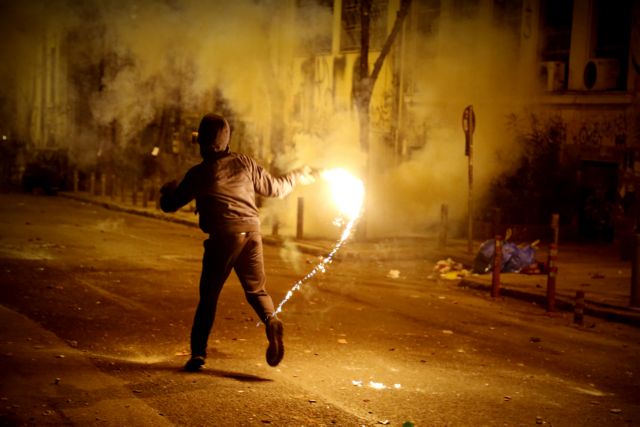 The city center of Athens turned into a battleground on Sunday evening, on the anniversary of the murder of Alexandros Grigoropoulos in 2008 by police officer Epaminondas Korkoneas. Anarchists and riot police clashed for hours after the conclusion of the march, which numbered about 5,000 demonstrators.

Many of clashes took place in the area of Exarchia, where Grigoropoulos was shot dead, with protesters setting fires and setting up barricades. About 500 anarchists threw petrol bombs and stones at the police, which responded with tear gas and flash bang grenades. In total 30 protesters were detained and six arrested, while three police officers were hospitalized with burns.

During the clashes a 1st floor balcony on Solomou Street caught fire, but residents were quick to extinguish it. One car that was parked on Soultani Street was burned, while the Police managed to prevent the burning of another car on Stournara Street. Protesters have alleged that they were assaulted by the police, with others claiming that they were struck in the head by the riot police units. The police also claimed to have found buried boxes with petrol bombs and gas masks on the Strefi Hill.

Clashes in other cities

Aside from Athens, many marches and demonstrations took place in other cities across Greece, with some ending in violent clashes with the police. In Crete, protesters in Iraklio and Chania clashed with the police, with one ATM being smashed. The northern Greek town of Komotini also saw clashes outside the local university, with one demonstrator being detained.

In Kalamata the demonstrators attacked the police forces stationed out the mayor’s office after the conclusion of their march. Earlier they threw paint and rocks at the Bank of Greece offices, the local SYRIZA offices and a number of banks. The police announced that it detained 10 people.