The derbies between Panathinaikos and Olympiacos are typically polarizing sporting events in Greece, which have unfortunately… 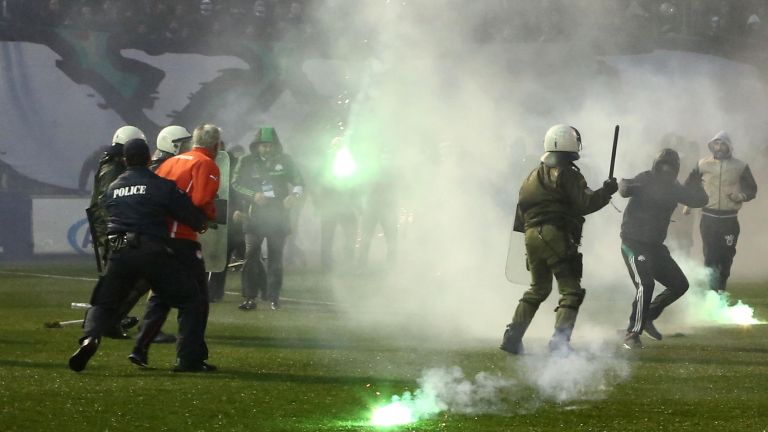 The Deputy Minister of Sport Stavros Kontonis is to announce the indefinite suspension of the football championships in Greece, after discussing the matter with the presidents of the Super League Giorgos Borovilos and Football League Spyros Kalogiannis and the Alt. President of the Hellenic Football Federation Vangelos Topoliatis. Mr. Kontonis also met with representatives of the Hellenic Olympic Committee and the Hellenic Gymnastics Federation.

After the meeting, the presidents of the football authorities revealed that the Deputy Minister has decided to suspend all football games indefinitely, until the necessary measures are taken. The games will resume once these measures have been implemented. So far no announcements have been made regarding these measures, but it appears to be the introduction of electronic tickets, abolishing fan clubs and installing CCTV cameras in the stadiums.

Mr. Kontonis has arranged to meet with the association of profession football players (PSAP) at 5pm and then with the Prime Minister Alexis Tsipras at 6pm. After discussing with the PM, announcements regarding the suspension will likely be made.


The derbies between Panathinaikos and Olympiacos are typically polarizing sporting events in Greece, which have unfortunately escalated from noble competition and pride for one’s neighborhood, to violent hooligan clashes with riot police and suspicion.

Unfortunately, the derby in Athens on Sunday was marred by violent outbursts of football hooligans, a pitch invasion and dozens of flares and fireworks being thrown towards the players, coach and owner of the Piraeus-based team. Although the “Greens” won the game on the pitch, the clash with the “Reds” continued at Super League’s board meeting on Tuesday.

With the chaos quickly getting out of hand, the Prime Minister Alexis Tsipras has arranged to meet with the Deputy Minister of Sport Stavros Kontonis and Alt. Finance Minister Nantia Valavani in Parliament ιν  order to discuss possible solutions. The Alternate Minister of Public Order and Citizen Protection Yannis Panousis also supports the suspension of games.

In an interview on SKAI, Mr. Kontonis explained that the events that took place at Sunday’s derby were «incomprehensible», that the situation has escalated greatly and questioned what message is sent to society when team presidents act the way they have been. He clarified that the State is not in the position to intervene to discipline clubs that appear to break the rules. The Deputy Minister also announced that no sporting tournament will start next season unless the provisions for electronic tickets are fully implemented.