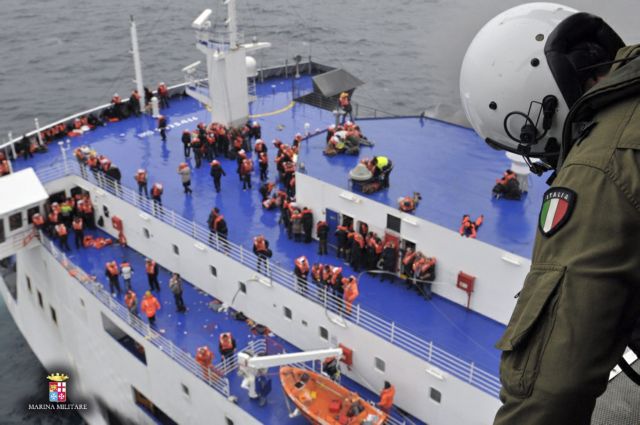 The huge operation to rescue the 422 passengers and 56 crew members that began on Sunday has concluded and five people are reported to have died. A number of crew members have remained on-board to assist the authorities in their operation. These developments have not yet been confirmed by the Greek side.

According to the Ministry of National Defense, a C-130 will travel to Bari, where it will pick up any of the rescued ferry boat passengers wishing to return to Greece. The Italian television network RAI has reported that a passenger has argued that four passengers have so far died during the rescue, although this not yet been confirmed by any official sources.

Greek and Italian helicopters had been airlifting the passengers – most of whom are Greek – and transferring them to nearby vessels. A team of Italian medics boarded the Norman Atlantic, but no serious injuries were reported. Efforts are being made to tug the boat to safety, although there is some confusion whether it is being taken to Italy or Albania.

The fire broke out in the car hold area of the ferry boat early on Sunday morning, as it was headed from Patra to Ancona, Italy. It has not yet been determined what caused the fire. At the time the “Norman Atlantic” was about 45 nautical miles off the northern coast of Kerkyra. A number of passengers contacted media outlets and described the dramatic situation on board the Norman Atlantic. With the ship’s interior in flames, the passengers were forced to seek shelter on deck, exposed to the elements.

The Minister of Shipping Miltiadis Varvitsiotis is in constant communication with his Italian counterpart and explained that the Italian authorities have prioritized setting the fire under control. The Greek authorities have issued statements to inform of any developments.

The Italian-flagged ferry boat, which was leased by Greek shipping company ANEK, was carrying 222 vehicles in the car hold, most of which are tanker trucks carrying olive oil. The ship’s maximum carrying capacity is 195, suggesting that the overloading may have contributed towards the fire.

The Greek ambassador in Italy Mr. Themistoklis Demiris told To Vima late on Sunday afternoon that the fire on-board the Norman Atlantic was under control and confirmed that one passenger, a male Greek, tragically died during the rescue operation. The man appears to have been trapped in the slide of the vessel with a woman.