Troika heads to meet with Minister of Finances on Tuesday morning 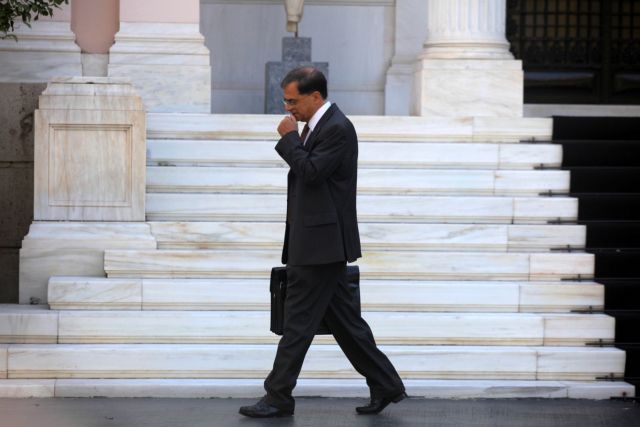 The Minister of Finances Gikas Hardouvelis is scheduled to meet with the troika for the third and final time in the first phase of the fifth review of the Greek program at about 9:30am on Tuesday.

The three troika heads, the European Commission’s Declan Costello, the IMF’s Rishi Goyal and the ECB’s Klaus Masuch, will leave Athens shortly after the meeting and will likely return after the publication of the bank stress test results on the 26th of October. The troika’s technical teams will remain in Athens.

According to an article by Bloomberg, the troika has not been convinced by the budget that the coalition government submitted on Monday, as there are doubts whether it will work towards helping the country overcome its financial problems. Bloomberg cites two unnamed officials who claim that despite the partial improvement of fiscal divs, there is no “credible backstop in case market conditions worsen”.

The Bloomberg article argues that these opinions contradict the central line followed by the coalition government and the Ministry of Finances. Additionally, the Bloomberg article points out that after meeting with four different Ministers on Monday, the troika was unable to come to a deal regarding red loans or tax and insurance debts.

With the coalition government seeking a vote of confidence from Parliament on Friday, the Minister of Finances has had to change his plans regarding the IMF’s Annual Summit in Washington. Rather than visit the American capital on Friday, Mr. Hardouvelis will travel on Saturday and has arranged to meet with IMF chief Christine Lagarde at midday on Sunday.

The two are likely to discuss the major Greek issues, such as the debt, the ongoing troika review and what will happen after the European bailout program concludes at the end of the year. Mr. Hardouveli’s predecessor and current governor of the Central Bank of Greece Yannis Stournaras and SYRIZA MP Giorgos Stathakis will also be in Washington for the IMF’s Summit.