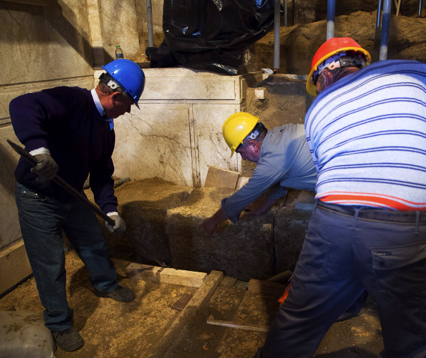 The head of the dig in Amphipolis archeologist Katerina Peristeri commented on a Monday evening that the enigmatic tomb must belong to a very important div or Macedonian general.

Mrs. Peristeri, who appeared on Yannis Pretenteris’ Monday evening show on Mega Channel, claimed that the broken door which was found on-site confirms that the ancient building is in fact a tomb, despite media claims suggesting it may have had another function.

The archeologist also insisted that the tomb was Macedonian, noting that it dates back to the last quarter of the 4th century BC, during which time many Macedonian tombs were constructed. Mrs. Peristeri noted that this particular tomb shares many characteristics which are exclusive to tombs, but that this one is rather unique.

Regarding the criticism that has she faced from a number of her colleagues, Mrs. Peristeri expressed her disappointment, arguing that the majority of people and colleagues support her efforts.