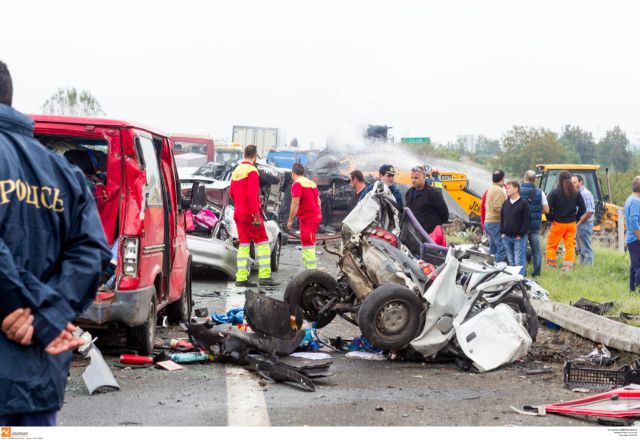 The 42-year-old man in charge of the company that was carrying out the road works where a massive pile up occurred on Sunday is scheduled to face the examiner in Veria today to address charges of disrupting traffic safety by negligence.

The 39-year-old truck driver who caused the serious accident will face the examiner on Thursday. He faces serial manslaughter and bodily harm by negligence charges. In the preliminary examination the driver claimed that after the Polymylos poll booth his truck’s break system failed.

Meanwhile, on Monday a Romanian man handed himself in to the authorities, claiming that at the time of major collision he was in the front passenger seat of the truck. The man claims that he was being trained by the driver on the truck’s route and that after the collision he got scared and fled the scene.

Special expert Panagiotis Madias told To Vima on Monday that the driver’s claims raise many questions, as if his breaks overheated the truck wheels should have seized up or caught on fire. The expert further notes that the 39-year-old should have taken measures to slow down his speed, since he claims to have been aware of a problem with his breaks. Mr. Madias pointed out that investigation must focus on “other parameters” rather than the driver’s claims.

Three people who were seriously injured on Sunday – an 18-year-old woman and two men aged 22 and 64, are being treated at the AHEPA hospital, with their condition appearing to stabilize. A 25-year-old woman who received treatment at the AHEPA was discharged on Monday.

Furthermore a 76-year-old man treated at the hospital of Veria continues to be in a critical condition, while two young children who were injured on Sunday, aged 16 months and 4 years old, are in a good condition and are receiving treatment at the G. Gennimatas hospital.

Amateur footage from the aftermath of the pile up