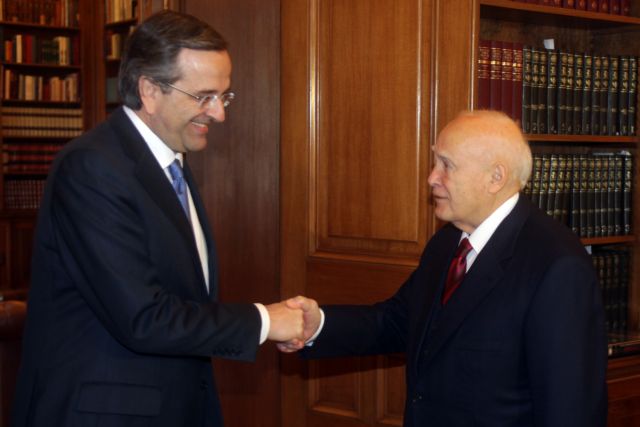 Mr. Samaras admitted that some steps are “still missing” but that he was confident that the financial crisis plaguing the Greek people is over. Mr. Samaras added that his goal is to support growth and to reverse many of injustices committed as a result of the crisis.

During the meeting, Mr. Samaras told Mr. Papoulias that in his recent trip in Brussels he broached the subject of growth to the other EU Prime Ministers, who responded positively to a greater coordination. Mr. Samaras also reported that there a “good climate” and that the Greek people’s sacrifices and efforts are being recognized.

Mr. Papoulias thank the PM for the “good news” and expressed his hope that the crisis, particularly youth unemployment, is overcome. The President was also pleased that Greece’s European partners are “waking up to tackle the major problems”.

Recent developments, such as PASOK’s proposal to abolish a 50-seat bonus in Parliament that the first party receives in general elections, were also addressed, even though the PM wants to avoid delving into such a controversial issue.

At present though there is no general consensus on the issue, with President of Parliament Evangelos Meimarakis arguing that the bonus ensures that coalition governments will have the strength to support their policies, while the Minister of Culture Panos Panagiotopoulos proposed reducing the bonus to 30 seats.