After the coalition government managed to come to an agreement with the troika after months of negotiations, it now has to prepare for the critical vote in Parliament… 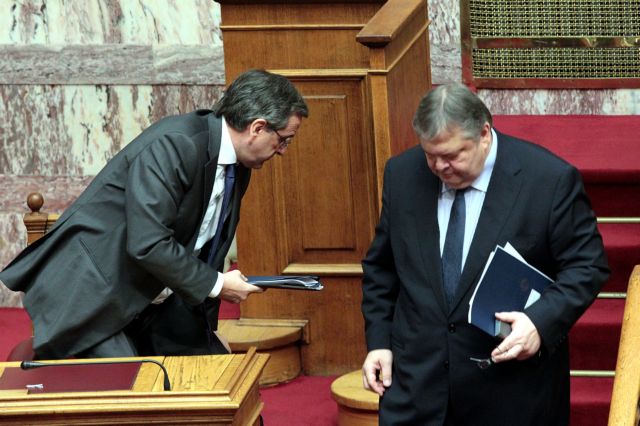 After the coalition government managed to come to an agreement with the troika after months of negotiations, it now has to prepare for the critical vote in Parliament, in order to ratify the deal.

MPs from both New Democracy and PASOK have expressed their reservation over a number of points contained in the deal, with a few rebel voices threatening to vote against the bill. Antonis Samaras has argued that he will not tolerate any deviation from his party’s line on the vote.

As such, it appears that the deputy Minister of Agricultural Development Maximos Harakopoulos will soon realize his threat to resign over the proposed deregulation in the sale of milk. High ranking New Democracy executives have argued that they cannot “jeopardize everything over milk and medication” and expressed their surprise at the reactions against the deal with the troika, when the agreement has not yet been publicized in full.

Other New Democracy MPs that have expressed their opposition to the troika deal are Ioardanis Tzamtzis, Giorgos Vlachos, Alexandros Kontos and Giorgos Stylios, while MPs Giorgos Orfanos and Giorgos Kalantzis were more reserved in their estimation. In the PASOK camp, MPs Nikos Sifounakis, Thodoris Moraitis and Michalis Kassis remain opposed to the deal. Agreement for New Greece MPs Andreas Loverdos and Christos Aidonis have also expressed their opposition to the agreement.

The Minister of Growth Kostis Hatzidakis has claimed that the OECD “toolkit” will benefit consumers and met with the Minister of Agricultural Development Athanasios Tsaftaris (without the presence of his deputy, Mr. Harakopoulos) to discuss the deregulation of milk. The proposed “milk of the day” category will be exclusively Greek milk and have a shelf-life of two days, while all other milk will have to clearly label origin and duration.

As for the other major moot point of the deal, the pharmacies and the regulation of non-prescription medication, the Minister of Health Adonis Georgiadis has asserted that the reactions are excessive. The pharmacists claim that the changes introduced will encourage the development of an oligopoly in their sector.