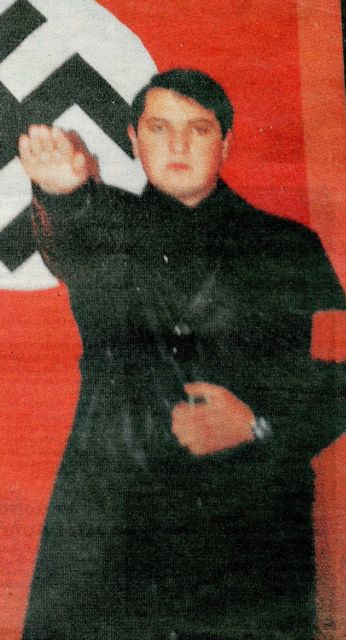 The defense attorneys of the Golden Dawn MPs facing serious felony charges of establishing a criminal organization received a huge package of DVD from the police with the evidence to be used as evidence. The case file includes a wealth of photos, documents and videos illustrating the racialist ideology and covert methods and practices of the ultra nationalist party.

One video shows party leader Nikos Michaloliakos at the oath taking ceremony of new Golden Dawn members, where he confesses his Nazi ideology and gives Nazi salutes. In one particular video Michaloliakos admits Golden Dawn members are Nazis and that “everyone must kill the Jew inside them”. He also appears in numerous videos threatening to “finish off” and “hang” his political enemies.

Footage from the oath ceremony shows Golden Dawn members admitting that their racist ideology, surrounded by Nazi symbols and arguing that they will “crush everyone like worms”. In the election campaign speech from 2012 Michaloliakos urges his supporters to remain calm to “avoid a provocation of 5-6 deaths that could be pinned on Golden Dawn”.

Evidence recovered from the house of Nikos Michaloliakos includes pictures of German soldiers executing blind-folded prisoners, a copy of Joseph Goebbels’ Principles of Propaganda, where it is noted that “Propaganda to the home front must create an optimum anxiety level”. Other photos show a minor giving a Nazi salute as well as photos from Nazi gatherings in Germany and elsewhere abroad.

Amongst the evidence is a map of targeted buildings in Exarchia, IDs belonging to police officers in Thessaloniki, racist pictures to compare “whites and blacks” and much more. The evidence collected by the police also includes an extensive history of mIRC and Skype chats used by Golden Dawn MPs and members. Videos from Golden Dawn events in Gythio, Thermopiles and elsewhere should members of the ultranationalist party cooperating with police forces against anarchists.

Golden Dawn also held detailed information on other MPs, such as Rena Dourou (contained in a folder entitled “the blonde from SYRIZA”) and Zoi Konstantopoulou, as well as reporters.