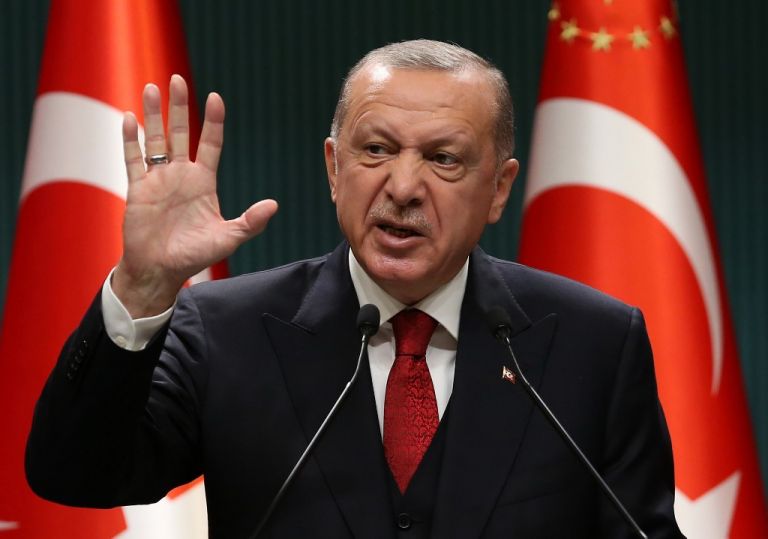 President of Turkey, Recep Tayyip Erdogan gestures as he gives a press conference after the cabinet meeting at the Presidential Complex in Ankara, Turkey, on September 21, 2020. (Photo by Adem ALTAN / AFP)

The expanded US-Greece strategic relationship as reflected in the revised Mutual Defence Cooperation Agreement is by all accounts another step – after the Greece-France defence accord – toward shielding Greece against Turkish threats.

The expanded US-Greece strategic relationship as reflected in the revised Mutual Defence Cooperation Agreement, that is to be signed tomorrow in Washington by Foreign Minister Nikos Dendias and US Secretary of State Anthony Blinken, is by all accounts another step – after the Greece-France defence accord – toward shielding Greece against Turkish threats and challenges to Greek sovereignty.

Although Washington did not accept the Greek government’s request that the deal include a military facility on the island of Skyros as an additional deterrent, Turkish President Recep Tayyip Erdogan has exhibited intense concerns over the deepening of US-Greece strategic ties, even as his government grows ever more distant from the Biden administration.

The agreement with France – with Greece’s purchase of Rafale fighter jets and of Belharra frigates – gives Greece a strategic advantage in the Aegean and forces Ankara to review its strategic stance with limited choices, especially amidst an undeclared US weapons embargo [F-35 fighters] due Ankara’s procurement of Russian S-400 missile systems.

Kurds in Syria: A major obstacle in US-Turkey ties

The core issue that led to the unprecedented deterioration of US-Turkey relations is not only the S-400s, but also the dispute over Turkey’s actions in Syria. The matter has evolved into a public clash after US President Joe Biden’s letter to Congress in which he cited Turkey’s destabilising role in requesting authorisation for a one-year extension of America’s military presence in Syria. The letter underlines the threat to the battle against the Islamic State posed by Turkey’s military presence and activity.

The letter provoked Ankara’s rage. Turkish Foreign Minister Mevlut Cavusoglu attacked the Biden administration for directly aiding the YPG [Kurdish militia] even though it knows that the group is one and the same with the PKK, Turkey’s arch-enemy, which the US has characterised as a terrorist organisation. He went as far as to say that the Biden administration is violating US law.

Meanwhile, Erdogan is confronted with a domestic quagmire. The country’s extremely difficult economic situation makes his path to the 2023 presidential election much rougher.

The nationalist rhetoric of his coalition partner and leader of the Nationalist Movement Party, Devlet Bahceli, has complicated the country’s foreign relations, which have impacted on the parity of the Turkish lira – now nine to the dollar

The nationalist opposition, which for over a decade has been pushing Erdogan to claim “the islands that Greece occupied” now is pressuring him to send the Turkish seismic vessel Oruc Reis to research areas included in the illegal Libya-Turkey memorandum, delimiting the two countries’ supposed economic zones, and in the continental shelf of Cyprus

In a statement, the Turkish defence ministry has responded to the nationalists’demands by publishing maps and offering assurances that it will not permit de facto situations and will defend the country’s rights and interests in the Eastern Mediterranean.

If a modus vivendi is not reached, a further shift by Ankara toward Russia will lead to new complications, both bilateral and in the NATO framework.