Mitsotakis and Anastasiades discussed their next steps in coordinating a strategy to confront Ankara, including ongoing efforts to resume talks on a Cyprus settlement. 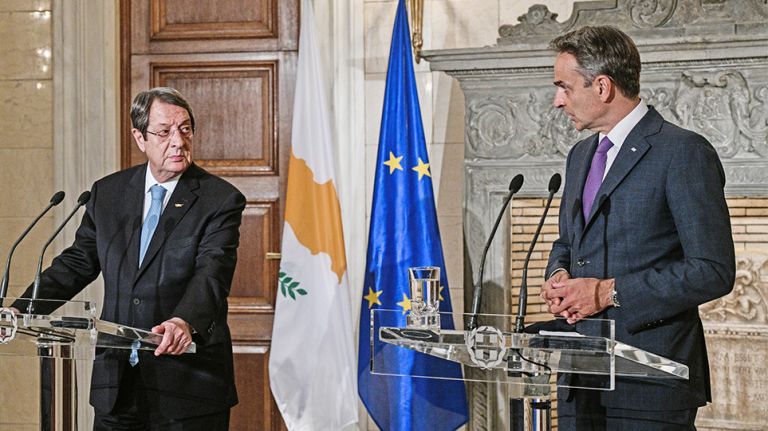 Prime Minister Kyriakos Mitsotakis and Cyprus’ President Nikos Anastasiades sent a stern message to Turkey after talks in Athens today that they are united in a solid front in confronting Turkish President Recep Tayyip Erdogan’s attempt to change the status quo on the ground in Cyprus and that Greece and Cyprus will never forfeit their paramount right to self-defence.

The two leaders discussed their next steps in coordinating a strategy to confront Ankara, including ongoing efforts to resume talks on resolving the Cyprus problem based on UN resolutions.

Analysts and a segment of the media in Greece and Cyprus have underlined that as yet there is no apparent effective, medium-to-long term strategy to counter Ankara’s provocations, beyond soliciting statements of support from strong international players, such as the US and the EU.

The EU, however, in a series of summit meetings has refused to take sanctions against Turkey – particularly as regards  its illegal activities in the Southastern Mediterranean – partly because of Ankara’s crucial role in stemming the huge flow of refugees and migrants seeking to enter the EU (mainly through Greece) and partly because of huge commercial interests of powerful EU member-states.

For now, that seems a distant prospect as Ankara and the Turkish Cypriot community are stubbornly demanding a two-state solution [de jure international recognition of a second state in occupied Cyprus], a prospect resoundingly rejected by Cyprus, the US, the EU, and Russia.

“Turkish demands that recognition of a co-equal [with the Republic of Cyprus] international status and sovereign equality of the illegal, secessionist entity in the occupied part of Cyprus be a precondition for re-starting settlement talks – and for a two-state solution – are unacceptable, violate international law, and are rejected a priori in principle,” Mitsotakis said.

The talks were held one week after Erdogan’s declaration in occupied Cyprus that he will open about three percent of the Turkish-occupied ghost city of Varosha in violation of UN Security Council resolutions.

Today’s meeting comes straight on the heels of the Turkish president’s illegal visit to the occupied, northern part of the island and his announcement regarding the fenced-off city of Varosha.

“The new, illegal Turkish actions in Cyprus are absolutely condemnable as they blatantly violate relevant UN Security resolutions and display contempt for the conclusions of the European Council [summit],”Mitsotakis said.

“There has been an international condemnation of these actions.”

“Essentially, Ankara maintains that Athens and Nicosia dragged along entire world [to espouse their positions], whereas it should ask how it managed to draw the opposition of the entire world,” he said.

The PM stressed that Greece unswervingly stands by Cyprus and supports in practice the efforts of the Republic of Cyprus to reverse what was announced regarding the partial opening Varosha.

Underscoring the fact that the Republic of Cyprus is a member of the EU that is represented internationally by its legal government, the PM declared – echoing a recent declaration by European Commission President Ursula van der Leyen and others – that the EU will never accept a secessionist entity and a permanent partition of the island.

Turkish Cypriots seek to ‘remain part of the European family’

Mitsotakis also underlined that the Turkish-Cypriot community “want to remain part of the European family”.

About half of the population in occupied Cyprus are settlers from Turkey and their descendants, with whom the initial Turkish Cypriot residents have over the decades had an uneasy relationship. A large proportion of the original Turkish Cypriot community have emigrated since the 1974 Turkish occupation.

Notably, Cyprus’ EU Accession Treaty (Protocol 10) stipulates that the entire geographic area of the island (save the British sovereign bases, a remnant of colonial rule) has been admitted to the EU but that the European acquis (law and rules) will be extended to the currently occupied north following a settlement of the Cyprus problem.

For his part, Anastasiades announced that the Republic of Cyprus will undertake initiatives to block the demand of Turkey and the occupation regime regarding the partial opening of Varosha.
.
He said his government will intensify its effort to create the conditions that will allow UN Secretary General Antonio Guterres to hold a new conference on the Cyprus problem with a substantial dialogue.

Anastasiades said that a new effort to reach a solution must pick up where the last substantial settlement effort left off in the failed settlement talks in Crans Montana, Switzerland, a prospect that Ankara has repeatedly flatly rejected.

Some analysts both in Cyprus and Greece have maintained that Ankara’s maximalist stance (a two-state solution) in fact aims to drag the Greek Cypriot side toward a loose confederation, a stark departure from the stated objective (a bi-zonal, bi-communal federation with a fairly strong central government – of both the Greek Cypriots and the Turkish Cypriots – and of the UN – in over four decades of talks