Alexandroupolis as new Souda: US, Greece near deal on bases – what the US wants, what Athens seeks

In the political part of US-Greece negotiations, Athens sought certain quid pro quos, particularly certain guarantees of defence against Turkish threats, which did not materialise. 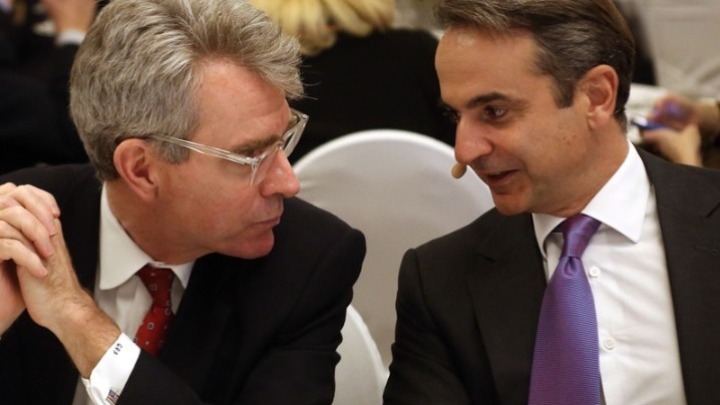 The transformation of Alexandroupolis into a “new Souda” is perhaps the most basic change that can be expected after the completion of negotiations that are in full for the new amendment of the bilateral Mutual Defense Cooperation Agreement (MDCA).

The geographic position of Alexandroupolis (and of Thrace more broadly), as well as the emerging axis toward Varna, Bulgaria, has become extremely valuable for US (and NATO) strategic planning as an alternative route to the Straits of the Bosphorus, given the importance of the Black Sea.

Naturally, Washington’s planning now stresses flexibility and mobility which suggests a shift away from large bases as Ramstein, Germany once was. Now the key is facilities that allow the stationing and movement of forces.

According to sources, the extension of the duration of the MDCA for five years appears to be a done deal (there had been thoughts of a three-year extension). The amended agreement is expected to be signed by autumn.

However, according to To Vima’s sources the prospect of US Secretary of State Tony Blinken visiting Athens – as his predecessor Mike Pompei had done – to sign the agreement with Foreign Minister Nikos Dendias seems difficult, certain press reports notwithstanding.

Instead, the most likely scenario is that (if the pandemic permits) the signing will occur during Dendias’ scheduled visit to Washington around October and will coincide with the next round of the US-Greece strategic dialogue.

More certain in terms of timing is the scheduled visit to Athens, in late August, of the Chairman of the Senate Foreign Relations Committee Robert Menendez, who is a dedicated friend of Greece and an architect of the recent “U.S.-Greece Defense and Inter-parliamentary Partnership Act”.

The ongoing negotiations are essentially technical in nature and are being conducted by the defence ministry. There is, however, an important political parameter. Compared to the prior amendment of the Annex of the MDCA, the ongoing talks are easier. The American side initially submitted a list of 15-20 locations, and the Greek side submitted some of its own, including Aegean islands, about which To Vima had reported at the time.

However, the prospect of Washington using facilities in Rhodes, for example, would be more problematic for the US than beneficial, as Turkey’s protestations that the islands should be demilitarised would be insufferable. Of course, that does not mean that American Navy ships and war planes will stop sailing in the area and flying over islands disputed by Ankara.

The initial long list of locations has been reduced to three or four, sources told To Vima, the idea being that they be near the four main facilities – Souda, Alexandroupolis, and Stefanovikio.

A characteristic case is that of the artillery Range in Petrohori, near Xanthi, where last May the US-Greece “CENTAUR 21” exercise (part of the multi-national Defender Europe ’21 manoeuvres) was conducted.

The wider region of Thrace, and Alexandroupolis especially, enthused General Christopher Cavoli, the commanding general of United States Army Europe and Africa, when he visited.

The Americans want to explore the infrastructure around Alexandroupolis in order to ensure flexibility in the stationing of forces. A crucial factor will be the extension of the fuel pipeline of the Hellenic Armed Forces, which currently runs from Elefsina to Kavala. The plan, which will be actualised with NATO funding, is to extend the pipeline from Kavala to Alexandroupolis so that US forces can refuel, and from there to Bulgaria.

Meanwhile, the railway connection of the Port of Alexandroupolis with Bulgaria is crucial and the expectation is that after the privatisation of the port (the Americans also have a keen interest in neighbouring Kavala) the railway line will be electric powered.

The American company that is interested in the port also manages the Bulgarian port of Varna.

Seasoned observers note that Greece-US relations are flowering. The recent defence cooperation Act shepherded through the Senate by Robert Menendez, created prospects for an expansive cooperation.

The Hellenic Navy’s procurement of its next frigates is in the forefront. In Athens, many await with interest the release of American ships (such as the Ticonderoga-class cruiser) in the framework of the EDA programme as an interim solution.

At the same time, at the political level, the two sides see eye to eye as regards the Eastern Mediterranean.

Athens noted that in contradistinction to Germany, which excluded Greece from the recent Second Berlin Conference on Libya, the US invited Greece to the recent meeting in Rome of foreign ministers of the Global Coalition to Defeat ISIS.

Effort to receive guarantees against the Turkish threat

The spectre of Henry Kissinger’s letter (which has been mystified) to the late Greek foreign minister Dimitris Bitsios still haunts many diplomats.

Nikos Dendias, sources told To Vima, had mulled the idea of requesting a mutual defence provision and had instructed his associates to examine various possibilities. That ambitious objective did not come to fruition in part due to the limited negotiating mandate of the American side.

Now, it appears that the most likely scenario is a letter, along the lines of that sent by former Secretary of State Mike Pompeo to Prime Minister Kyriakos Mitsotakis in January, 2020, but Greek diplomatic sources say that talks on this point are in a state of flux.