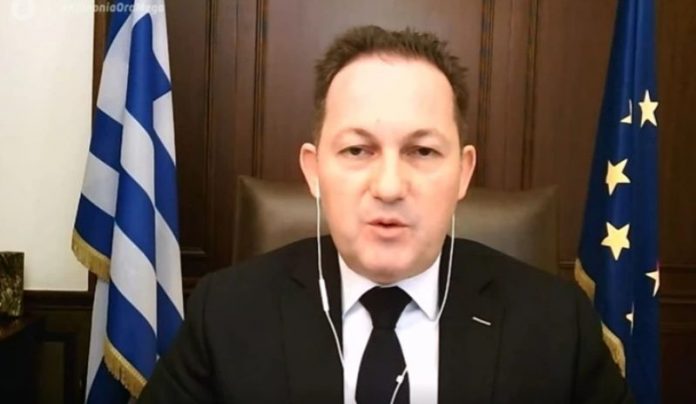 Greeks will soon not have to send an SMS to a state-operated line in order to leave their homes Alternate Interior Minister Stelios Petsas announced today, even as he expressed confidence that the gradual opening of all economic and social activities will proceed smoothly.

While noting in an interview with private SKAI television this morning that the requirement will be lifted, he stressed that citizens must still be extremely careful in abiding by existing public health measures, which include wearing masks and social distancing, especially while socialising with a number of individuals.

Reports have indicated that the move could come as early as 14 May.

Petsas also said that problems with the state’s distribution and management of self-tests will have been resolved by the end of May.

A large number of parents who are required after the 10 May re-opening of junior and senior high schools administer COVID-19 self-tests to their children two times a week and report the result on a state site have reported that the vial with the buffer liquid was empty and other problems.

Moreover, many have encountered difficulties in reporting the result on the state-run platform.

Aside from school children, workers in various jobs – including supermarkets, retail shops, restaurants, mass transit, hair salons and barber shops and beauty salons – are required to take the self-test twice weekly. The employer will pay for one of them.

Petsas stressed that self-tests are a crucial tool in ensuring a safe re-opening of all economic and social activities.

Petsas said the government is as yet unprepared to offer fewer restrictions to vaccinated citizens, a move that has already been made by the German Bundestag.

“Given the fact that we have a limited number of vaccines we cannot discuss privileges for people who have been vaccinated because they are not yet available to everyone. When we reach the point that there are more vaccines than the number of people who want to get them then there have to be certain incentives,” he said.

The government has drawn severe criticism for its refusal to impose mandatory vaccinations doctors and health care workers, mainly at state hospitals which are the only ones that handle COVID-19 cases.

He noted that the government is mulling the prospect of considering as fully covered by vaccination people who have fallen ill from COVID-19 and have been vaccinated with only the first dose of two-dose vaccines.

Petsas also acknowledged that the communication management of issues related to AstraZeneca’s vaccine was flawed and that the EU should avoid mixed signals.