The tribute was realized with the decisive contribution of the Hellenic Tourism Organization’s (EOT) French Service and on the occasion of the official start of the tourist season in Greece for 2021. 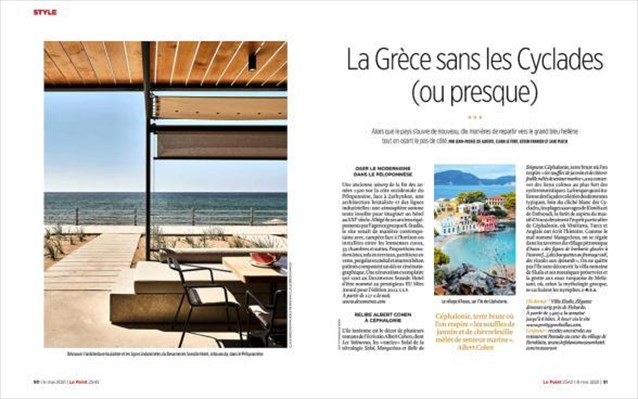 According to a relevant announcement, the tribute was implemented with the decisive contribution of the Hellenic Tourism Organization’s (EOT) French Service and on the occasion of the official start of the tourist season in Greece for 2021.

The editors of the magazine urge readers to visit ten Greek areas that are lesser-known to French travelers, presenting the unique features that make them attractive and special. “As the country ‘reopens’, ten ways to return to the deep Greek blue, daring to visit well-hidden destinations,” the article notes characteristically.

• the search for charming aspects of architectural modernism, as captured in an interwar wine cellar in the Western Peloponnese, which has been transformed into a modern hotel,

• the visit to the island of Cephalonia, which is the background in many novels by the French author Albert Cohen,

• a tour of the hinterland of Messinia with its olive groves, medieval towers, and excellent local cuisine,

• wandering in Thessaloniki, with the Byzantine UNESCO-listed monuments, the Ottoman remains, and its unique gastronomy,

• the acquaintance with the tradition of rebetiko in Syros,

• hiking on the trails and the authentic nature of Zagorochoria in Epirus,

• the enjoyment of the beautiful beaches of Halkidiki,

• the “mapping” of Exarcheia, the “restless” and charming neighborhood of Athens, with its remarkable artistic stock and interesting street art,

• exploring the trails, villages and natural wealth on the island of Halki, and

• the discovery of Hydra, where the great songwriter Leonard Cohen lived and created an important part of his work.

The tribute is accompanied by rich photographic material and a lot of useful information about the respective areas, which EOT’s French Service provided to the editorial team of the magazine.