Mitsotakis: Next 10 days crucial, vaccine must not breed complacency 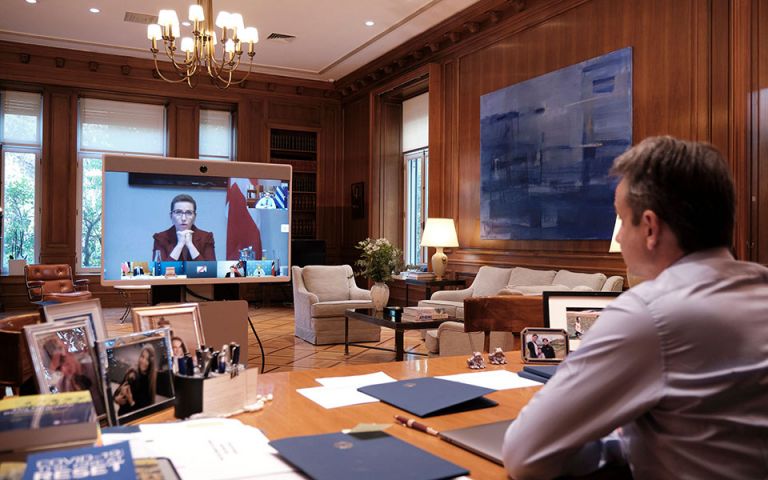 Mitsotakis spoke about the need to coordinate the distribution of vaccines and the technical specifications required so that populations can be vaccinated swiftly.

PM Kyriakos Mitsotakis warned that news of Pfizer’s expected COVID-19 vaccine must not cultivate a sense of security and that the next ten days will be decisive in determining how the epidemic will develop in Greece.

Mitsotakis was participating in a teleconference of the COVID Management Group of countries that handled the first wave of the pandemic successfully.

Mitsotakis spoke about the need to coordinate the distribution of COVID-19 vaccines and the technical specifications required so that populations can be vaccinated as soon as possible.

The logistics of global distributions of vaccines (there will on all likelihood be more than one) have yet to be ironed out but the EU has already ordered 300mn vaccines and will be coordinating their distribution.

Mitsotakis referred to the hopeful announcement of Pfizer’s vaccine, which is said to be 90 percent effective and brought international jubilation.
He stressed the need for continued strict enforcement of public health measures and that anticipation of a vaccine must not prompt citizens to relax their guard with a sense of complacency.

The second meeting of the prime ministers focused mainly on plans and strategies to restart their countries’ economies and to gradually re-open economic and social activity, as lockdowns have had a devastating effect on the economies of countries that have implemented them.
Mitsotakis spoke about developments in Greece and «the epidemiological course, the exponential rise in the number of infections in Greece, and the pressure on the health system that led to a lockdown for three weeks» according to a release on the PM’s official website.

During the teleconference, the leaders detailed the situation with the second pandemic in their countries and focused on the sharp increase in the rate of transmission and in the number of cases, especially in Europe .
Many countries have imposed either strict restrictive measures or a partial lockdown in which some sectors of economic activity can carry on and schools can remain open.
Greece has shut middle schools and high schools and is allowing pre-schools, kindergartens, and primary schools to continue to operate.
The leaders discussed the reopening of schools in a number of the countries participating in the group.

Another key focus of the meeting was the re-opening of tourism.

Several countries are already opening or considering opening borders to their neighbours.

Mitsotakis underlined the importance of tourism cooperation between the countries of the group, which all have a relatively limited COVID-19 case load.