Greece is ripe for investment, the EU ‘will not be blackmailed’ Mitsotakis tells economic forum

Erdogan’s court was rife with scandals. He gave himself a 1mn dollar monthly salary, his assets were said to be worth nearly one billion dollars, and he provoked everyone. 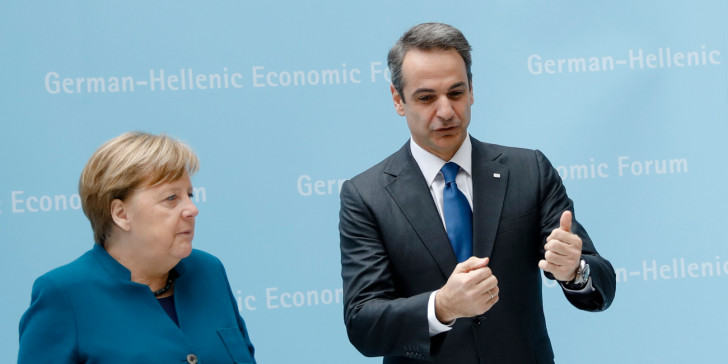 Prime Minister Kyriakos Mitsotakis outlined his goverenment’s economic plans and the impact of the emerging migration crisis at Greece’s eastern borders, which are at once the borders of the EU.

In addressing the German-Hellenic Economic Forum in Berlin Mitsotakis stressed that Greece and Europe cannot be blackmailed, referring directly to Turkish President Recep Tayyip Erdogan’s use of migrants to push for EU, US concessions.

Regarding the economy, Mitsotakis declared that Greece is already on a path of growth and that new problems are making it accelerate, not slow down reforms.

«The asymmetric threat from the East changes the priorities and the health crisis makes our work more difficult,” he added.

“In the last 10 days we have shown that we can defend our national and European sovereignty. Greece and Europe cannot be blackmailed by anyone,» he said.

“The support offered by many European countries is tangible proof of European solidarity,” said Mitsotakis. »

“When we needed our friends, dear Angela (Merkel), they gave us both moral and practical support,» he added.

«We are entering a new phase as regards migration. President Erdogan will be in Brussels this afternoon and this development is positive. I hope it is the start of a de-escalation of the crisis,» Mitsotakis said.

He pointed out that if the Turkish president wants a review of the EU-Turkey agreement on migration «which he has, himself, effectively demolished,» then he must take the following actions: remove the desperate people in Evros and stop spreading fake news and propaganda.
Mitsotakis suggested that Erdogan should also examine other possible improvements, such as joint patrolling to control the flow of migrants at the Turkish border and pointed out that the return of those who illegally enter Greece should be possible from mainland Greece, as well as the islands.

Greece has always recognised and continues to recognise that Turkey has played a crucial role in the management of the refugee issue but this can’t be done using threats and blackmail, he added.

The prime minister then asked for an agreement for the voluntary relocation of children and teenagers from Greece to Europe. «I call on the countries to participate in this tangible proof of solidarity,» he noted.

Mitsotakis spoke of Greek-German economic relations as one defined by «equal partners, who will be able to launch investments for the benefit of both sides.»

He described Greece’s current economic indicators as «extremely positive (…), the highest since the year 2000.»

Mitsotakis also noted that the most important outlook is for the two countries’ cooperation to develop in more dynamic areas, such as green energy, pharmaceutical technology and new methods in waste management.

Concerning German tourism in Greece, Mitsotakis noted that «we want to raise the number of 4.5 million Germans who come to Greece as tourists mostly in the summer,» and mentioned winter tourism as one of Greece’s merits.

«As Germany is the honored country at the 2020 Thessaloniki International Fair, we look forward to the presence of Chancellor (Angela Merkel) at the Fair, to have the opportunity to inaugurate it together,» he concluded.

No fatalities from coronavirus so far

Mitsotakis referred to the spread of coronavirus and Greece’s measures, stating that there have been no fatalities in Greece so far.
«Today we announced a set of measures for the support of economic activity and working people,» he said.

«However, no mass measure can substitute for individual responsibility. No central decision can bring results if the citizens to not abide by it. We must avoid even shaking hands; we did this with Chancellor Merkel, we have not quarreled,» he said.

He said that further coordination is required at a European level, adding that a teleconference is being scheduled. «It is clear that 2020 will be a different year from what we predicted and that fiscal targets probably will not be met. We must react quickly,» the prime minister said.