With no direct contact with the war zone Turkey invented maritime borders with part of war-torn Libya in order to dispute Greece’s Exclusive Economic Zone, as defined by the 1982 UN Law of the Sea Convention. 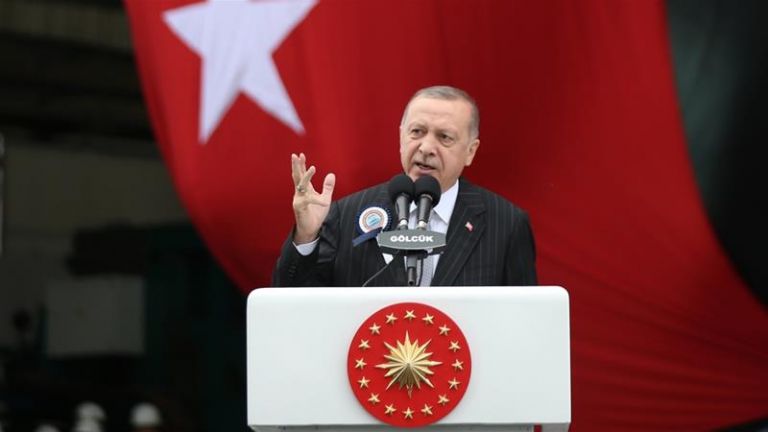 The instability and complexity that prevail in the broader region of the Southeastern Mediterranean are for Greece endangering issues of national importance and national rights.

The wealth that is hidden under the sea is attracting everyone, intensifying adventurism, and aggravating competition.

Undoubtedly many supra-national and national forces – many with not so innocent intentions – are active in the region.

Multinationals, big powers, regional nations, and all sorts of adventurists act as they see fit with no concern for the region and its people.

That stands true first of all for Turkey which believes it has found an opportunity to exhibit the arbitrary expansionism of its leader and expand the field of its illegal, putative “interests”.

It is using Libya as a battering ram and a basis for disputing the interests of others.

With no direct contact with the war zone it invented maritime borders with part of war-torn Libya in order to dispute Greece’s Exclusive Economic Zone, as defined by the 1982 UN Law of  the Sea Convention.

At the same time Turkey is disputing the sovereignty of the Greek islands in the Aegean.

Turkey’s untrammeled audacity and enormous provocations have led to not unfounded suspicions that Ankara is getting ready for extremely bellicose acts against Greece.

In this it is unfortunately aided by international conditions and the vacillation and unstable stance of the West.

Most superpowers and natural allies of Greece are tending to their interests rather than acting based on EU principles.

The 19 January Berlin Conference on the Libya crisis and Greece’s exclusion from it offer ample confirmation of the above.

Greek public opinion rightly believes that Athens will handle a prospective foreign crisis on its own and that it should be preparing for such an eventuality.

Old constants are vanishing and alliances do not appear so close and they appear unable to avert harsh, undesirable events.

Under such conditions and without underestimating the possibilities of diplomacy Greece and its political forces are obliged to be vigilant and work to do away with hostile conditions of sterile and imprudent disputes.

The times demand a different stance and behavior on the part of the country’s dominant political forces.

It is not unlikely that Greece will be tested in the near future and will have to manage difficult situations that demand national unity and the greatest possible consensus.

At the same time there must be a collective decision on restructuring the state, the economy, and national defence.

The almost universal acceptance of the presidential nomination of Council of State Chief Justice Ekaterini Sakellaropoulou is a sign of progress and sets a standard for a political understanding and stance in this tumultuous period.

There are also other areas in which a broad consensus on overarching national affairs can be achieved.

There is room in our era for the usual divisions between Greeks.