Authorities are attempting to glean information about what contacts he may have had in Athens and where he may have learned the Greek word turkofagos (Turk-eater). 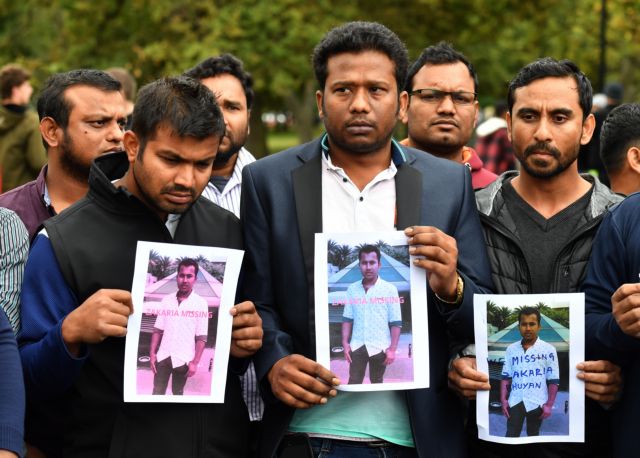 epa07443942 Friends of a missing man Zakaria Bhuiyan hold up photographs of him outside a refuge centre in Christchurch, New Zealand, 17 March 2019. A gunman killed 50 worshippers at the Al Noor Masjid and Linwood Masjid on 15 March. A suspected gunman, 28-year-old Brenton Tarrant of Australia, has appeared in court on on the morning of 16 March and was charged with murder. EPA/MICK TSIKAS AUSTRALIA AND NEW ZEALAND OUT
Share

Greek Police and intelligence services are feverishly investigating a mysterious 2016 stay in Greece of Brenton Tarrant, whose diatribe of over 70 pages explained the motivations of his massacre of at least 50 Muslims in New Zealand and included references to Greek and Turkish history.

Tarrant had painted in white on one of his weapons the word Turkofagos (Turk-eater, the moniker of Greek Revolutionary hero Nikitaras) and Lepanto (site of the enormous 1571 Battle of Lepanto, which dealt a huge blow to Ottoman power).

A high-level Greek security source told Ta Nea reporter Vasilis Lambropoulos that Tarrant “had stayed for about 20 days in our country in the March-April, 2016 period”.

Ten days off the radar

Authorities have not as yet found traces of Tarrant’s movement and activity in the ensuing ten days. Ten days after his arrival in Athens he next pops up at the airport of the northern port city of Thessaloniki.

Greek authorities believe that Tarrant stayed in Athens and took trips to southern and central Greece and that he may have stayed for a few days in Thessaloniki.

It appears that Tarrant then traveled to Istanbul and from there directly to Slovenia.

Greek Police’s counter-terrorism bureau has set up a task force to scour for information regarding Tarrant’s activity after he reached Athens by aeroplane from Istanbul on 20 March, 2016. They are combing through his transactions, how he paid for hotels, and his ticket bookings by bank debit or credit card.

“The fact that he went to Santorini shows that the purpose of his trip was at least partly tourism, while there do not appear to be locations in Crete that are linked to his anti-Islamic beliefs,” the security source said.

Authorities are attempting to glean information about what contacts he may have had in Athens and where he may have learned the Greek word turkofagos (Turk-eater).

Military and international affairs analyst Thanasis Drougos has cited sources saying that Tarrant traveled to Thermopylae and Delphi and had stayed for several days in Fthiotis Prefecture.

According to information sent by New Zealand authorities to Interpol and reviewed by Greek investigators, Tarrant used Athens as an intermediate stop before his trip to the Balkans and the broader region.

Drougos told Greek Open television that Tarrant stayed in Greece for about to weeks in 2016.

“Specifically, he arrived in Athens from Cairo and then proceeded by bus to visit sites of exceptional historical significance. The itinerary included Delphi, Mycenae, and Thermopylae as well as Fthiotis, where he appears to have stayed quite a while,” Drougos said.

“He also visited Sounio and Salamina and then traveled north to Thessaloniki and Serres. He then went to Bulgaria by bus and at the end of March he flew from Sofia to Bucharest.