In an exclusive interview with To Vima, the Harvard economics professor and former IMF chief economist discusses Greece’s growth prospects. 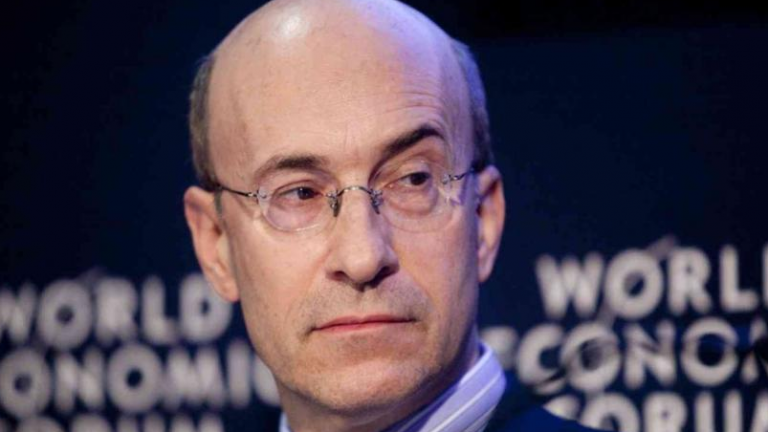 Harvard Economics Professor and ex-IMF Chief Economist Kenneth Rogoff discusses the challenges posed by the Greek economic crisis, the errors made in addressing them, and ways in which the economy can be placed back on a growth path in an exclusive interview with To Vima on Sunday (24 February).

Rogoff says that Greece in better days in the past should have drastically reduced its fiscal deficit, and that while useful the debt write-down of 2012 was too little, too late.

Meanwhile, while Rogoff stresses that the global economic crisis has rocked Western democracies and argues that the economic and social over-simplifications of populists simply perpetuate the decline.

A proponent of globalisation and open borders, the renowned economist expresses optimism on the prospects of the European economy.

Moreover, he defends the economic prescriptions for Greece of the IMF, which he once served at the highest levels.
However, Rogoff argues that the IMF should no longer involve itself with the Greek crisis unless the EU approves a generous debt haircut.

With an eye to the forthcoming Greek general election, Rogoff says that the next government must speed up structural reforms, which are the only ticket to growth.

Only strong growth can help reconstruct the destroyed Greek middle class Rogoff said, indicating that this reconstruction must be an overarching objective.

In recent years, the way people see the world has changed – as if they have changed their beliefs, their ideas and their perceptions. They have lost confidence in institutions, reject elites a priori, and question any political power even if they have elected it. The result is the prevalence of ideas and the emergence of leaders that seem to interrupt the evolutionary course of human civilization. Is this trend reversible?

There is no question that the global financial crisis has shaken Western democracies to their roots, with the ramifications are likely to play out for at least another decade. From a longer-term perspective, the fundamental problem stems from the prolonged growth slowdown that has undermined the standard pro-market argument that a rising tide lifts all boats, and made people impatient for change.

At the same time rising intra-country inequality, fueled by a mix of technological change and unchecked corporate monopoly power, has fueled a search for better ideas to share the benefits of prosperity. The standard answer of economists involves higher taxes on better-off individuals to help fund investments in health and education along with greater transfer to alleviate poverty. There is also a major growing consensus among economists that perhaps the single most effective policy to improve growth and to alleviate inequality would be for governments to be much more aggressive in controlling monopolies and to create greater market competition for products and workers.

However, many populists are not nearly satisfied with these answers and argue for a much heavier-handed version of socialism. There will certainly be countries that try this approach; it could happen soon in the United Kingdom if Jeremy Corbyn takes over as Prime Minister, and several of the leading Democratic candidates for US President in 2020. Countries that go too far in reversing the market-oriented reforms of the past three decades are throwing out the baby with the bathwater, and risk long-term secular decline.

One last point: the populist mantra of inequality conveniently ignores the fact that by many measures, income distribution at a global level has vastly improved over the four decades. The rise of China and India alone has lifted hundreds of millions of people out of desperate poverty. So those who say European and US leaders have a moral obligation to restrict trade in order to improve income distribution are implicitly weighting the welfare of a large part of humanity at zero.

International organizations, eminent economists, even governments are predicting a slowdown in global growth. Are we in the face of a new downward cycle of the global economy? Even worse, are we facing a new global recession?

The International Monetary Fund is predicting a modest slowdown in global growth, though I think their predictions are too optimistic on China. In my view, the stark centralization of power China has witnessed in recent years is fundamentally inconsistent with China’s need to become a more-decentralized consumer-led economy, instead of one highly reliant on housing investment and exports. Even if China is able to engineer a soft landing to its current growth malaise, the trend is significantly down, and it likely to look like a soft landing on to a downward slope.

I am more optimistic about Europe, in part because Northern European countries, especially Germany, have enormous capacity for fiscal stimulus, in part because the long legacy of the financial crisis – in my research with Carmen Reinhart we find that recoveries often take 8-10 years – is starting to fade.

So far, I have been speaking of short-term cyclical movements in growth. As for the longer term, I strongly suspect that the growth pessimists are wildly underestimating the effects of AI on productivity growth, if not in this decade, then in the next one. Of far greater concern to me is the problem of global warming, where advanced economies might be making progress but it is not going to help if Asia continues its massive investments in coal. Needless to say, US President Trump’s idiotic view that global warming is pure fiction is incredibly dangerous.

The day after the financial crisis everyone recognized the need to deleverage the global economy. Ten years after this consensus, we see that what has happened is the opposite. Leverage is booming and the world is swimming in a record amound of debt, which rose last year to $244 trillion, or 318% of global GDP according to the Institute of International Finance…

The main point is that medium- and long-term global interest rates (adjusted for inflation) have fallen sharply since the financial crisis, and far more than financial markets, central banks and most economists expected.

At today’s near record low interest rates – the likes of which have not been seen the financial repression period of the 1950s and 1960s, public and private borrowers are rationally taking advantage, and lenders are rationally letting them do so. An important caveat is that high debt can still be very risky if it is primarily short-term debt, since no one can guarantee that interest rates will not someday reverse course.

It should be remembered that the trend fall in interest rates was not anticipated by financial markets just seven or eight years ago, and had they risen by a similar amount – which markets, central banks and the IMF saw as a distinct possibility – we would be a very different world today, with many countries struggling to manage debt.

Do you believe that the Greek debt, which exceeds 180% of GDP, is sustainable? How could it be reduced? Do you think the 2012 Greek debt cut (PSI) was useful?

Throughout 2010 and into 2011, I strongly advocated for sharp debt write-downs (forgiveness) for the periphery countries of Europe, including Greece. If done promptly and generously it would have stemmed the growth crisis in Europe and even paid benefits to the Northern countries, despite the fact they would have had to recapitalize their banks.

The idea that the periphery countries could just growth their way out high debts was laughable, and flew in the face of evidence that very high public debt overhang is associate with lower growth (even if some US economists, who seemed to think every country was like the United States, disagreed.) Unfortunately, the 2012 Greek debt cut, while useful, came a bit late in the game after many German and French banks were able to slip out.Northern Europe should have accepted a much larger debt write-down to the point where Greece could again start to access markets.

How can growth be stimulated under conditions of fiscal austerity and high unemployment?

The painful answer is structural reform, though this is very difficult to do without a sufficiently supportive macroeconomic environment.

Though European policymakers are loathe to admit it, the original sin was to bring Greece into the euro, and taking away the safety valve of exchange rate adjustment. Having made this mistake, Northern Europeans should have owned up to much larger debt writedowns, and to a system of transfers to smooth cycles. Greece, for its part, should have sharply restricted government deficits during the goods time, and employed aggressive regulation over private sector borrowing from abroad.

Timely and decisive debt write-downs would have given policymakers in Greece space for modest stimulus and discouraged capital flight. It would also have removed the German bogeyman as a scapegoat for deep-seated structural problems in the Greek economy that need to be confronted.

Nevertheless, let’s understand that the bulk of the austerity Greece felt in the early years after the crisis had to do with adjusting to much smaller fiscal and current account deficits. This would have involved massive adjustment even if all the foreign debt had been forgiven 100%. The immediate cause of austerity in most crisis countries is not harsh IMF policy, but the sudden cutoff from private-sector borrowing.

The fact that Greece could not float its exchange rate was also a huge constraint that the 1980s and 1990s debt-crisis countries in Latin American and Asia did not have to face.

In January 2013 IMF chief economist Olivier Blanchard admitted in a report that the creditors of Greece and Portugal made a mistake in their calculations (wrong multipliers). Was this mistake decisive for the recovery process of the two economies?

This is the technocratic explanation of the simple fact the growth assumptions in the EU/IMF programs were wildly optimistic given the debt overhang these countries faced. The IMF should have refused to fund either of these programs without having Northern Europe agree to massive debt write-downs.

Ιn recent years, the use of plastic money has grown spectacularly in Greece. Is this enough to limit some of the tax evasion that is traditionally endemic in the country? No Greek government has so far shown the willingness to take effective action for this purpose.

It’s too bad because even modest steps to reduce cash usage would likely lead to a notable improvement in tax collection.

I have had several Greek thought leaders approach me over the past few years with ideas for stricter regulation of cash in Greece, with the aim of reducing tax evasion. It is not necessary to take extreme measures. My 2016 book The Curse of Cash discusses a range of suggestions for discouraging the use of cash in large-scale tax evasion, including wiring cash register, restricting the maximum size of cash transactions, and phasing out large denomination notes. Unfortunately, the last idea requires participation of the entire Eurozone, which has at least stopped printing 500 euro notes.

In 2019 general elections will be held in Greece. What should be the first economic measure of the new government?

The great tragedy of the Greek debt crisis is that it has wiped out a large part of the middle class, impoverishing some, pushing others to leave. There is no magic bullet to heal this wound, but it has to be the focus of the government, and there is no way to rebuild the middle class without restoring growth. And, given very limited fiscal space and a fixed exchange rate, there is no way to achieve growth without structural reforms of the type the IMF and European Union have argued for.

For its part, the European Union should be much more proactive in channeling funds for investment and education into Greece, even if Germany and France need to run larger deficits to finance it. Otherwise, one way or the other, Greece will eventually either end up leaving the euro, instituting massive capital controls that more or less amount to the same thing.