The PM’s statement that the bilateral dialogue aims to lay the foundation for regular contacts as “one cannot build something more at this time” is indicative. 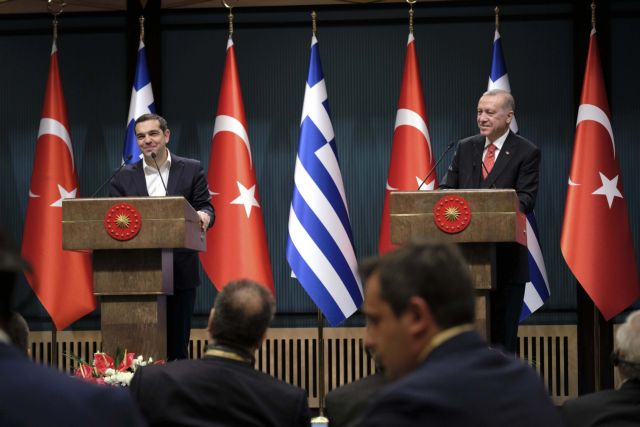 The Prime Minister’s official visit to Turkey, the first by a Greek PM in 11 years, does not appear to have produced immediate and palpable results as regards the problems that for years have bedeviled the two countries.

Beyond public niceties, the joint statements of the two leaders clearly demonstrated that differences were not bridged on the overarching issues.

One did not see the public disagreements that were aired during Turkish President Recep Tayyip Erdogan visit to Athens in December, 2017.

However, Erdogan made clear his persistence in demanding the extradition of eight Turkish military officers who have been granted asylum in Greece and about whom the Greek Supreme Court ruled that they cannot be extradited to Turkey. Erdogan did not hesitate to declare a bounty on them on the day that the Greek PM arrived in Ankara.

Erdogan also declared his interest in the Muslim minority in Thrace.

Meanwhile, there was not the slightest progress on the much discussed re-opening of the Ecumenical Patriarchate’s Halki Theological Seminary, because Erdogan linked it to Athens permitting the election of muftis (Muslim religious law scholars who can rule on family law) in Western Thrace.

It is clear that at this time there is not much room for steps to improve bilateral relations.

The PM’s statement that the bilateral dialogue aims to lay the foundation for regular contacts as “one cannot build something more at this time” is indicative.

It remains to be seen if a de-escalation of Aegean tensions will truly be achieved, so that in the future confidence-building measures, which have remained inert for a long period, can be implemented.

Such measures had been agreed to in the past and had reduced tensions for some time but were suspended after the failed coup in Turkey and Erdogan’s emergence as an all-powerful leader.

With both Greece and Turkey in the midst of an electoral cycle, it is almost certain that one cannot expect determinative decisions to improve the climate over the coming months.

It is also clear that geopolitical tumult in the broader region of the Southeastern Mediterranean does not for the time being permit important bilateral initiatives.

The visit this time may not have had dramatic implications, but beyond social graces and the agreement that there is a need for continued dialogue, it did not lead Greek-Turkish relations even one step forward.