What had occurred was a joint US-France exercise, to which Turkey was alerted by Nato systems, and Ankara hastened to tie up the adjacent area for a Turkish exercise. 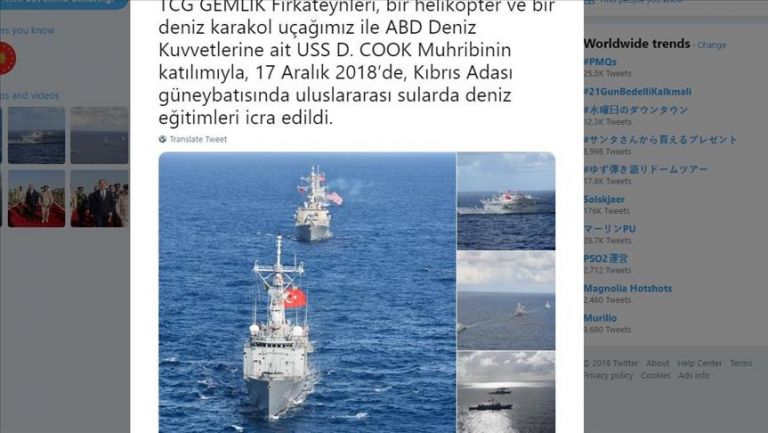 A war need not necessarily be conducted on land or at sea. It can take on various forms.

A war can become hybrid if the parties choose another field of confrontation, such as social networking platforms or cyberspace, which they use for diversionary tactics.

Turkey, which always had in its arsenal the dissemination of disinformation of various types, could not but have availed itself of today’s technology.

That is what one might view as noteworthy. Turkey, which is gathering troops for operations in Syria, has enough firepower to pose a serious threat to Cyprus, as it does constantly of late.

On 19 December, according to a report in the Cypriot newspaper Phileleftheros, as Prime Minister Alexis Tsipras and Cyprus’ President Nikos Anastasiades were preparing to go to Israel to participate along with Israeli PM Benjamin Netanyahu in their fifth three-way strategic conference – which had an added weight as it was the first with a US presence – a tweet from Ankara sent a message.

The exercise that never was

The Turkish Defence Ministry decided to inform everyone that Turkey and the US conducted a joint exercise with the participation of warships. The tweet was accompanied by a few photos of Turkish ships and an American ship.
The exercise was conducted on 17 December and the story was carried by the state-run Anadolu Press Agency two days later.

“Turkey’s TCG Gokceada and TCG Gemlik frigates along with a helicopter and a maritime patrol aircraft conducted maritime trainings with the USS D. Cook warship of the U.S. Navy, the Turkish Defense Ministry said in a tweet on Wednesday,” Anadolu reported.

The story was investigated by Nicosia and the conclusion was that it was a case of a hybrid warfare diversionary tactic. That view was bolstered by the fact that the day after the Anadolu story there was another report regarding a joint Turkey –Jordan exercise.

Turkey had once again resorted to disinformation with the use of cyberspace for purely communications reasons.

It was a US-France exercise

Though Turkey and the US do indeed conduct joint military exercises, this was not the case this time.

In fact, what had occurred was a joint US-France exercise, to which Turkey was alerted by Nato systems, and Ankara hastened to tie up the adjacent area for a Turkish exercise.

The aim was to give the impression that Turkey participated in the exercise with the US.

In fact, the American frigate has been in the area for some time. Among other tasks, it is monitoring oil and gas drilling by ExxonMobil in Bloc 10 of Cyprus’ Exclusive Economic Zone (EEZ).