The domestic clash that is raging in FYROM is not due only to disagreements over the accord. Foreign interventions by the two competing sides find fertile ground, due to the particular ethnic composition of the country. 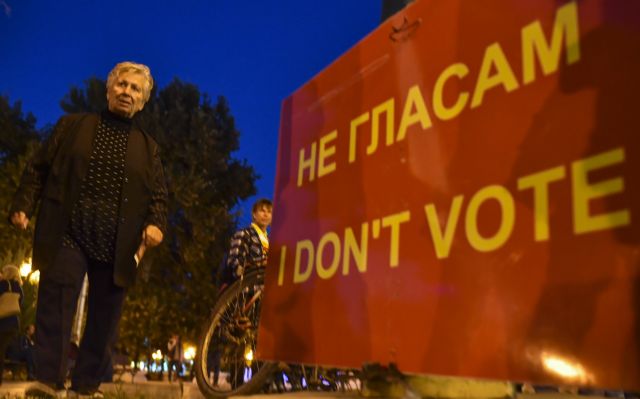 epa07052503 An elderly woman passes next to the banner during the small protest against a referendum to change the name of the state from Macedonia and endorse a name to end a long running dispute between The Former Yugoslav Republic Of Macedonia and Greece in front of the Parliament building in Skopje, The Former Yugoslav Republic of Macedonia on 27 September 2018.The referendum is scheduled for 30 September 2018. EPA/GEORGI LICOVSKI
Share

Those who are glad about the result of the referendum in FYROM on the Prespa Agreement, and those who seek to exploit it opportunistically, do not realise that the significance of an agreement with our neighbouring country transcends national biases and nationalist excesses.

History has often shown that the Balkans were and remain a region which can very easily be transformed into a tinderbox, as the nationalisms that have bedeviled the region for decades have still not subsided.

The problem is further aggravated by the fact that the region continues, for East and West, to be a field in which geopolitical claims and influence are pursued.

Moscow’s announcement yesterday that it views the referendum as invalid and that  it is reserving the right to veto the agreement in the UN Security Council, is indicative of the evolving pressures and competition.

The visit of the Serbia President to Moscow is no coincidence, as he too disputes the agreement.

It is by now obvious that the domestic clash that is raging in FYROM is not due only to disagreements over the accord. Foreign interventions by the two competing sides find fertile ground, due to the particular ethnic composition of the country.

Almost all Balkan states have reason to intervene, and East and West are doing the same, from different vantage points.

With the Kosovo issue open, with Serbia and Bulgaria seeking zones of influence, and with the US and Russia both seeking a role, the destabilisation of FYROM and of the broader region is a very real threat.

The situation is aggravated by the handling of the issue and the motives of regional political leaders, including Greece’s, who usually give priority to opportunistic choices, with a view to elections.

We have witnessed the fact that the agreement, instead of being managed with the broader national interests at heart, has been transformed into a field of division and relentless political skirmishes, initiated by the government, and maintained with the toleration and participation of the opposition.

Once again, we cannot see the forest for the trees.