Recent reports in the international press, and what To Vima gleaned from a recent visit, paint the picture of a hellhole of souls, a human melting pot, a contemporary raggedness, which is an offense to civilisation. 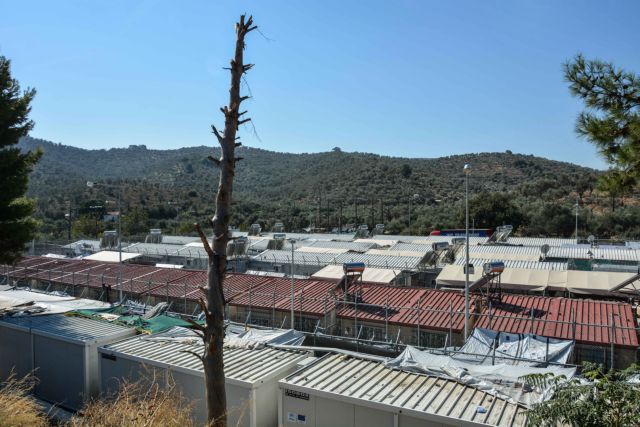 epa07042204 A general view of the containers for migrants and refugees in the Identification Center of Moria, Lesvos island, Greece, 23 September 2018. Efforts to relieve overcrowding that have stretched facilities at the reception and identification centre to breaking point are now underway, with 400 scheduled to leave for the mainland on 24 September and another 1,080 within the week. The total number of migrants and refugees officially residing on Lesvos is currently 10,841 as of September 21, of which 8,706 live in Moria. The camp is divided into a bewildering puzzle of zones and sections, including a 'safe zone' where access is restricted to the unaccompanied underage girls that live there and staff that work there, as well as areas for new arrivals, a neighbouring olive grove managed by an NGO, all of which comprise the anarchic "town" that has grown around the Moria camp. EPA/PANAGIOTIS BALASKAS ATTENTION: This Image is part of a PHOTO SET
Share

Wherever he goes, both domestically and abroad, the prime minister makes a vacuous speech with hackneyed phrases about refugees, boasting about his government’s contribution to managing the humanitarian crisis, and about solidarity shown towards those who are in a wretched condition.

The rhetoric is a far cry from the truth.

Greeks and foreigners who have experience with camps and refugee reception centres, say that they have never encountered such a situation.

They describe the conditions as miserable, noting that the Moria camp is worse than the one in Kenya, which is the most populated and largest in Africa.

Recent reports in the international press, and what To Vima gleaned from a recent visit, paint the picture of a hellhole of souls, a human melting pot, a contemporary raggedness, which is an offense to civilization, and leaves the worst impression about the country and its authorities.

About 8,500 people – among whom around 3,000 are children – of various nationalities are gathered in containers without windows, and sleep wherever they can, even on the floor. They utilise even the space between the containers, covering it with plastic or tin and laying down wooden pallets, so as not to sleep on the ground.

That is where they cook, eat, and wash up, and nearby sewage flows, exposing everyone and everything to infectious diseases, with unforeseeable consequences for public health.

When they need to register, to visit a doctor, to submit asylum applications, or just to receive the food offered to them – which by all accounts is miserable – they are forced to line up in endless queues, where tensions, disputes and occasionally clashes, occur.

It is no coincidence that everyone describes Moria as a “hole”. They speak of a unique scandal, as they cannot understand how all this occurred when 1.6bn euros have been given to Greece, in order to manage the refugee and migrant crisis.

Naturally, questions arise about where and how these funds were spent, who managed and who received them, and then presented this monstrosity to the domestic and international community.

A functional enterprise, which costs and receives, conducting a rudimentary check on buildings, goods, and services, would have handed over infinitely better structures than the miserable camps created by our government ministers.

Obviously, these reasonable questions led to a swift inspection by competent European authorities. They have experience, and comparative data from similar actions, in order to ascertain if and how much money, earmarked for the handling of the refugee crisis, was squandered or expropriated.

The prime minister, the defence minister, and all involved governmental players, are now accountable, and are being checked for the shame of Lesvos, and of the northern Aegean more broadly.

Neither their enraged protests, nor their occasional rhetoric about charity and hospitality, can purge them of their responsibilities.

The “hole” of Moria is indisputable, and it does and will continue to chase those responsible for a long time to come.