Galbraith reveals Varoufakis’ ‘Plan B’ that was never implemented

The declaration of state of emergency, immediate nationalization of the Bank of Greece, conversion of bank deposits into a… 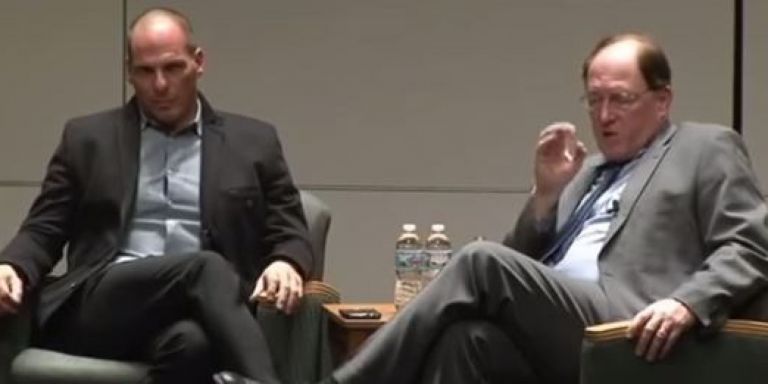 The declaration of state of emergency, immediate nationalization of the Bank of Greece, conversion of bank deposits into a new drachma, emergency public order measures and mobilization of civil servants were party of the ‘plan b’ that former Finance Minister Yanis Varoufakis was preparing, claims US economist James Galbraith in his latest book Welcome to the Poisoned Chalice: The Destruction of Greece and the Future of Europe.

As revealed in the new book, the former Finance Minister’s plan b (or ‘Plan X’ as he is said to have called it) involved banks in Greece remaining closed indefinitely, while wages and pensions would be paid with IOUs. The US economist also claimed that there was high secrecy over the plan, which even involved hiding cell phones in hotel refrigerators.

During the transition from the euro to the ‘new drachma’, the Ministers of National Defense and Interior would be tasked with maintaining order and it would be necessary to save fuel. Additionally civil servants in important public organizations (such as schools, hospitals and security forces) would be mobilized. The Prime Minister would then make an announcement on introducing the new currency.

In his book the US economist does not hide his disappointment about the Varoufakis plan not being implemented. As Galbraith explains, during a high-level meeting on the plan the prime minister did not ask to be briefed. As such work on the endeavor ended with an extensive memo being submitted in early May.