Venizelos: “I leave the post of president, but not politics”

The outgoing president of PASOK Evangelos Venizelos lashed out against the government and Giorgos Papandreou, in his final… 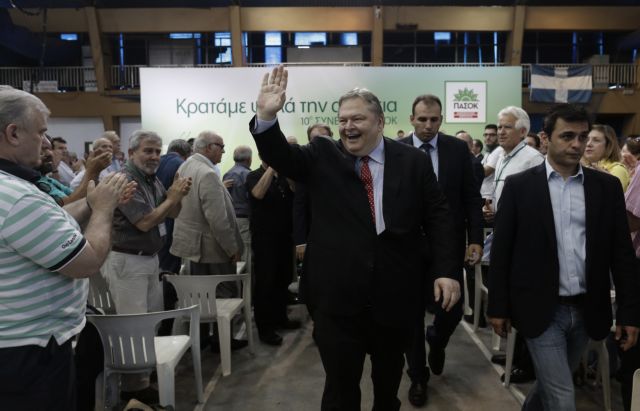 The outgoing president of PASOK Evangelos Venizelos lashed out against the government and Giorgos Papandreou, in his final speech as party president.

At the start of his speech at the party conference, Mr. Venizelos stated that PASOK would not facilitate the government in avoiding its responsibilities and called Prime Minister Alexis Tsipras to apologize to the Greek people “for the lies, delusions and deception”. He claimed that Greece’s problem is not so much financial, as much as it is social and political.

To this end he referred to ‘mistakes’ that have been made in the government’s foreign policy, citing the lack of negotiations and developments in the Cypriot dispute, the tension with Tirana and the recent crisis in FYROM. Mr. Venizelos was also highly critical of the Minister of National Defense Panos Kammenos, who he accused of being irresponsible and thoughtless.

In closing his speech, Mr. Venizelos explained that he was leaving the post of president, but he was not leaving politics or avoiding his responsibility. The outgoing president added that defending one’s efforts and positions is matter of national duty and truth.

The new party president will be elected next Sunday, on the 14th of June, in an election process that will be carried out across Greece. Three candidates have chosen to run for the presidency: Fofi Gennimata, Odysseas Konstantinopoulos and Andreas Loverdos. Author Thanasis Chimonas, who also wanted to run for president, did not manage to gather the necessary support.

The three candidates took turns presenting their platform of ideas, with Mrs. Gennimata arguing that PASOK must seek out alliances with other social democratic formations and spoke of a “new start”. Mr. Konstantinopoulos was in favor of transforming PASOK into a modern European force for reform and calling a new conference in spring 2016. Finally, Mr. Loverdos proposed renaming the party «PASOK Democratic Left» and supported a new conference for the center left by the end of the year.