Athens and Berlin clash over Schäuble’s comments on Varoufakis

The demarche issued by the Greek Ministry of Foreign Affairs, in response to comments that the German Minister of Finances… 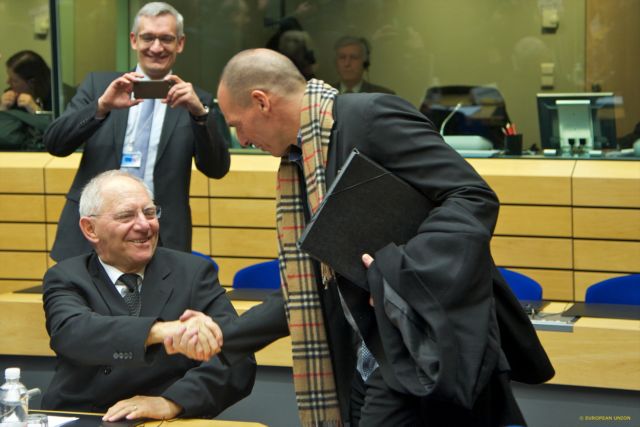 The demarche issued by the Greek Ministry of Foreign Affairs, in response to comments that the German Minister of Finances Wolfgang Schäuble made about his Greek colleague Yanis Varoufakis, has escalated the tension between Athens and Berlin.

While the German Minister’s comments appear to have been mistranslated – Mr. Schäuble is said to have called his Greek colleague «suddenly naïve«, rather than «foolishly naïve”, as originally reported – the Greek side insists that the demarche was in response to the dismissive attitude he has towards Mr. Varoufakis.

The German Ministry on the other hand claims that there is a “very good climate” and notes that Mr. Schäuble has praised Mr. Varoufakis, despite their major difference. It even reports that the German minister “stoically» accepted the news and considers the matter over.

Despite the official comments though, the divide between Athens and Berlin is growing; after clashing on the completion of the current program, the Greek side has brought up again the thorny subject of the German reparations, while the Minister of National Defense spoke of sending migrants and refuges to Germany.

The German press has helped raise the tension, as it regularly reported on political developments in Greece and presented every Greek measure and proposal as detrimental to the creditors or Greek economy. Recent reports in the German press for example denounced the Greek government’s opposition to privatizations that are financial unsound and detrimental to the environment.

The divide between Athens and Berlin continues to grow and there is little indication that the situation will improve over the next few days.