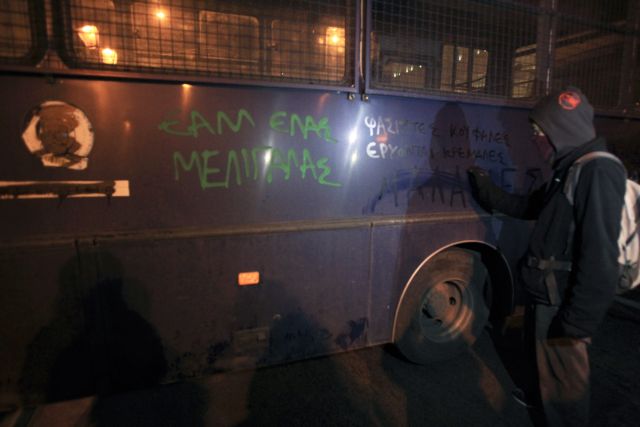 The decision of the new Alternate Minister of Public Order and Citizen Protection Yannis Panousis to remove firearms from riot police was initially treated with skepticism, however after Saturday’s demonstrations in Athens were carried out without any violence, riot police officers have commented that they felt “confused and uncertain”.

On Saturday Golden Dawn had organized a rally in memory of the three helicopter pilots who perished new the Imia Islets in 1996 during the escalation of tension with Turkey and in response a number of antifascist groups arranged counter-demonstrations and marches. The riot police were deployed without firearms and were instructed to keep a distance from the demonstrators.

This development also seems to have confused the protesters themselves, who took the opportunity to spray graffiti on the parked police vehicles and take photos. The riot police officers complained about the graffiti, as they felt that their “home” was being vandalized and they were not allowed to respond.

Amongst the new Alt. Minister’s initiatives were the restriction of the use of tear gas and the removal of riot police units that had been stationed outside public buildings in the city center. Police officials have estimated that the Alt. Minister’s initiatives are in the right direction, as the end results are satisfactory. They have noted that clarifications are needed regarding the deployment of riot police units.