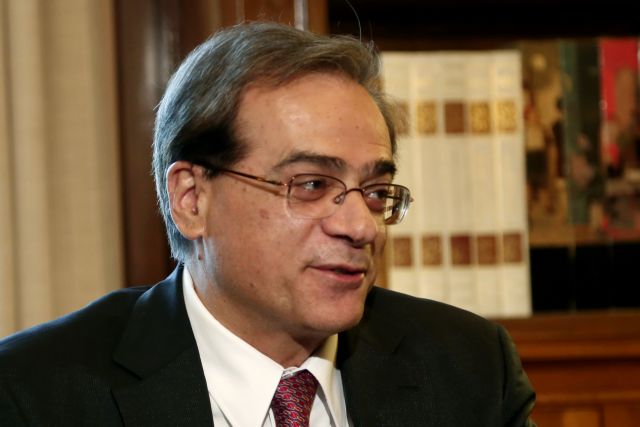 The Minister of Finances Gikas Hardouvelis expressed his concern that the political uncertainty can undermine the recent recovery of the Greek economy, in an interview he gave to the Wall Street Journal.

The uncertainty surrounding elections later this month, with the anti-austerity Syriza party leading in public-opinion polls, already has fanned fears: some 3 billion euros ($3.5 billion) worth of deposits have left the banking system in the past two months.

The sum is small—compared with the roughly 70 billion euros that have fled Greeks banks over the past five years—said Mr. Hardouvelis, who added that some of the outflows may be the result of increased tax payments falling due this year.

But it could be a harbinger of things to come, he said.

“The probability of a bank run is very small; the public understands that deposits are safe,” he said. “Yet, it is still the beginning, and we have to watch depositors’ behavior very carefully”.

Since early December, Greece has been thrust into political turmoil by an inconclusive parliamentary vote for president that has forced national elections on Jan. 25. Since then, businesses have frozen investments, privatizations have stalled, and tax collections have slumped. If this uncertainty isn’t resolved soon, said Mr. Hardouvelis, months of economic growth could be lost.

“If you lose the first quarter of the year, where the economy could have taken off, and then perhaps the second quarter, that gives you half the growth that you would have otherwise had” he said.

After waves of tough austerity measures aimed at fixing public finances, the economy last year emerged from six years of recession, one of the longest and deepest downturns in postwar European history. When full-year official data are released in mid-February, they are expected to show the economy grew about 0.6% last year, according to the official government forecast.

This year, the government sees the growth rate perking up to a 2.9% rate. But, said Mr. Hardouvelis, growth could fall to roughly half that rate in a “worst-case scenario”.

For most Greeks, the modest recovery hasn’t been felt. Unemployment is above 25%, and a quarter of Greek households live close to the poverty line. That has driven many voters to consider SYRIZA in the next election. The party vows to roll back the austerity program of the conservative-led government, which was implemented in exchange for a 240 billion euro international bailout from international creditors.

But SYRIZA, which according to recent polls has the support of roughly 30% of voters, also promises a tougher line with the creditors and has promised to reverse some of the concessions the nation made to get the bailout, such as hiring back public workers, cutting taxes, freezing privatizations, reinstating pension benefits, raising the minimum wage and lifting the taxable income threshold. It also wants Greece’s Eurozone partners to write off a substantial portion of the country’s debt.

Those policies, if SYRIZA implements them, promise to complicate Greece’s efforts to negotiate a new credit line with its creditors; the country’s current bailout program runs out at the end of February. A new deal would, among other things, unlock some 7 billion euros worth of promised aid—without which the government will begin facing a cash crunch by end March—and guarantee Greek banks continued access to cheap European Central Bank loans. No deal could further undermine the economy, Mr. Hardouvelis said.

Adding to the potential turmoil, Syriza leads the conservative New Democracy party by three percentage points in opinion polls, a lead that has been shrinking, but the polls show that neither Syriza nor the ruling New Democracy Party would secure enough votes to win a majority in Parliament. If neither party could build a coalition government, Greece would be forced into a second national elections within weeks, a sequence of events the country suffered through in mid-2012 at the depth of the Greek debt crisis.

“You don’t just need a stable government to be formed quickly; you need a government with a clear policy forward” Mr. Hardouvelis said.

The country’s political uncertainty, and the possibility of SYRIZA coming to power, has brought discussion of the possible exit from the Eurozone back on the table. ‘Grexit’, the word forged in 2012 to define such an exit, is finding renewed reference in banks’ research notes and the media. Although, Greece’s improved finances—and defenses erected by the European Union and the European Central Bank since the depth of the crisis—have helped soothe some of those fears.

Mr. Hardouvelis also added that a Greek exit from the euro is unlikely. “Politics in a country follows the deep wishes of the population and the population has a deep wish to stay with the West; that is associated with staying in the euro area”.