The Minister of National Defense Dimitris Avramopoulos, who was recently appointed as Maria Damanaki’s successor at the… 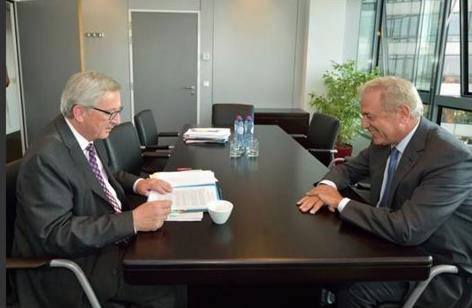 The Minister of National Defense Dimitris Avramopoulos, who was recently appointed as Maria Damanaki’s successor at the European Commission, met the EC President Jean-Claude Juncker in Brussels on Wednesday.

While no decisions have yet been made, Mr. Avramopoulos may be given the European Commission’s immigration portfolio, which the Greek government has consistently claimed. The Prime Minister Antonis Samaras posed the request to the Commission, as Greece is currently facing an immigration crisis.

The announcements regarding the appointments of the new European Commission are expected on Monday, with the new Commissioners tipped to assume office in November.

The former PM of Finland Jyrki Katainen appears to be the likeliest candidate for the finance portfolio, the former Finance Minister Pierre Moscovici is tipped for the competition portfolio, while EC Vice President Günther Oettinger may be appointed the energy portfolio.