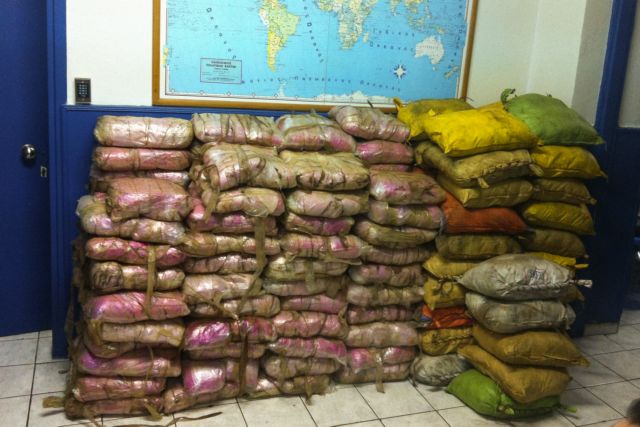 Following the Coast Guard and Police operation from last week that resulted in the confiscation a ton of heroin from a warehouse in Koropi and luxury home in Philothei, the authorities have located another ton of heroin, making this the most successful anti-narcotic operations in Europe.

On Sunday morning the authorities located 986 kilos and 600 grams of heroin in a warehouse in Koropi. It appears that the two tons of heroin were transported to Greece via the “Noor One” ship that remains docked at Elefsina. The authorities arrested 14 people, including the ten-member crew of the ship, the representative of the shipping company and an Iranian man who is thought to be in charge of the transport operation. One of the men arrested on Sunday appears to have been involved in the transfer of the heroin found in Philothei.

The ship began its journey from Sharjah in the UAE and is believed to have received the heroin in Oman, before arriving in Elefsina on the 7th of June, due to engine failure. The “Noor One” had been under surveillance by the Coast Guard for some time. The investigation of the ship revealed that the tanker had been converted so that the illicit cargo was hard to locate, even with the special police dogs.

The Minister of Shipping Mr. Varvitsiotis praised the efforts of the Coast Guard and commented that it will step up its efforts in combating the drug trade.