Koutsoumpas: “New Democracy and SYRIZA agree on EU and Eurozone” 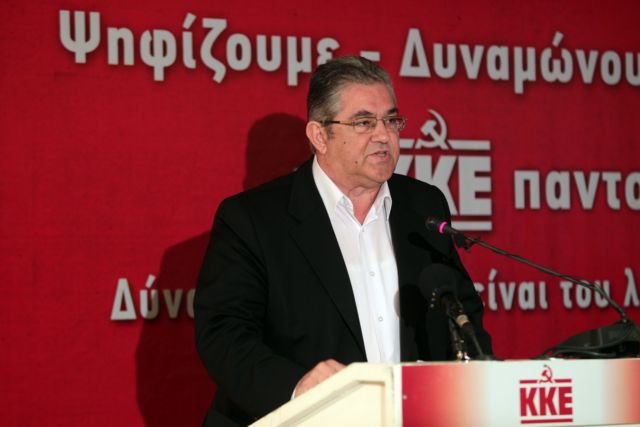 The general secretary of the Communist Party Dimitris Koutsoumpas gave an interview o ANT1 where he accused the government and opposition of cultivating false expectations and asserted that New Democracy and SYRIZA follow the same line in relation to the EU and Eurozone.

Mr. Koutsoumpas accused Alexis Tsipras of hypocritically for denouncing Angela Merkel’s politics, while recognizing her as a realist who will not endanger the Eurozone. Conversely, he maintained, the Communist Party will always be open about its positions, irrespective of the political cost.

When asked why his party participates in the European elections since it is against the EU and Eurozone, Mr. Koutsoumpas explained that his party’s MEPs have offered an invaluable service of revealing the EU strategies and plans. This in turn, estimated the general secretary, will help the people prepare to overthrow European politics in favor of reinforcing popular rule.

Mr. Koutsoumpas noted that his proposal does not affect only the Greek people, but all European people in favor of a new social organization, which he pointed out “we call socialism”. The KKE leader further explained that he supports the unilateral cancellation of Greece’s public debt and the socialization of monopolies with people rule.