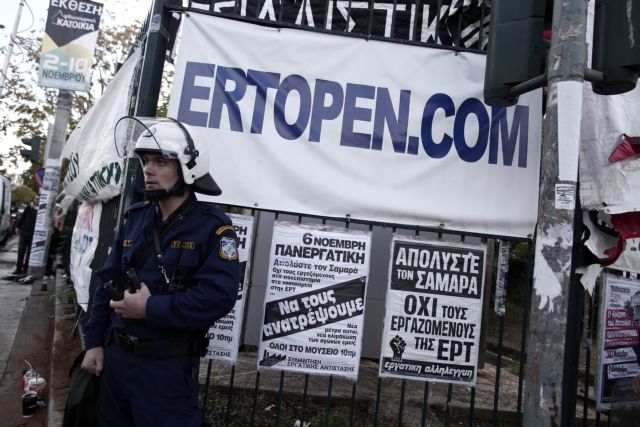 The early morning police operation for the evacuation of the ERT HQ in Agia Paraskevi during the critical round of talks with the troika representatives has caused strong reactions in Parliament.

The government is arguing that it is “fully implementing the law and putting and end to illegitimacy”, after the ERT employees occupying the building had repeatedly rejected the government ultimatums. According to government spokesman Kedikoglou, the Prime Minister Antonis Samaras and Vice President Evangelos Venizelos were in agreement and aware of the police operation.

Many government officers have argued that the State’s interests were harmed on a daily basis from the occupation and insisted that there were no other options available. The government justified its choice by referring to a ruling by the Council of State and the Minister of Public Order Nikos Dendias was mandated to show “calmness” and avoid any extremities.

The Deputy Minister of Public Radio and Television Pantelis Kapsis had failed to provide any solution to the occupation, prompting the drastic police intervention. With Greece assuming the EU presidency in January 2014, the interim public broadcasting service was unable to cover the event as necessary.

The opposition leaders SYRIZA demanded that the police forces vacate the ERT HQ immediately and commented that the police operation marked “a dark page in the history of public television and democracy”. SYRIZA’s announcement also stressed that “the people must rise up against the abolition of the rule of law and the subversion of democracy”.

PASOK issued a statement welcoming the eviction of ERT employees, arguing that “the rule of law was restored; the free and universal operation of Public Radio and Television is an imperative duty of the State authorities to protect the public interest”. The socialist party also stated that “the only ones who react are those turned ERT into an arena petty interests covering a small minority of employees”.

KKE condemned the coalition government for the police operation, arrest if unionists and use of tear gas against ERT employees and protesters. The Communist Party explained that “the implementation of the ‘law and order’ doctrine proves that the anti-worker and anti-people politics go hand in hand with the increase of absolutism and suppression”, while adding that “the response is the united struggle of all employees in the public and private sectors to overturn the anti-people policies”.