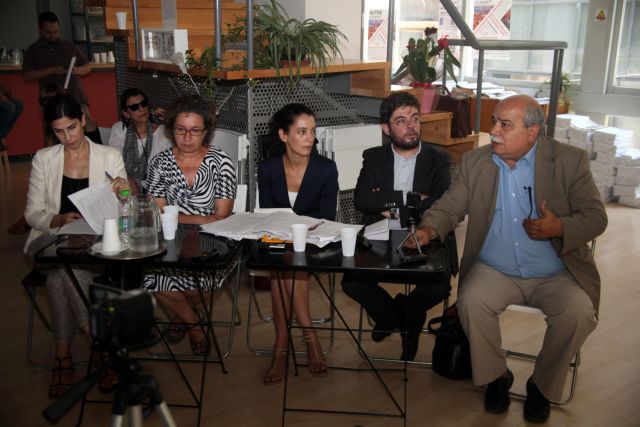 The lawyers of Kostas Sakkas held a press conference for their client’s plight and expressed their intention to address the European Court of Human Rights, over the “cynical aberration from legality” regarding the court order which extended his detainment without trial to 36 months.

Sakkas, who is accused of being a member of a the Conspiracy of Fire Cells (SPF) militant group, has been on a hunger strike since the 4th of June, the day the legal period of his detention expired. Sakkas admits to being an anarchist, but denies being a member of the SPF group.

They physician who overlooks Sakka’s health, Dr. Olga Kosmopoulou at the General State Hospital of Nikea, where he was rushed due to health complications on the 17th of June, reported that “his condition is not good”, that he suffers from hypoglycemic episodes and orthostatic hypotension and has lost 10% of his body weight.

Marina Daliani, an attorney of Sakkas, explained that “when he hadn’t even been detained for 18 months, his detention was extended due to a new case file, which doesn’t even mention his name. This is a trial that began in April. They have extended the detention for another 6 months, 36 in total, when the legislation states that in any case the total period of detention cannot exceed 30 months. That was an illegal decision that the Appeal Council did not bother to explain”.

Mrs. Daliani maintains that the case against him is arbitrary that has lead to a clear violation of the Constitution. The attorney also hints that the defense team will address the European Court of Human Rights, where she predicts “the conviction of Greece is certain. After all, this legal framework was established in 1996 precisely because Greece was previously convicted for similar cases”.

Kleio Papapantoleon from the Greek Union for Human Rights asserted that Sakkas’ persecution is proof of the judicial system’s failure to see through an important case of terrorism. Lawyer Michalis Kalogirou considers the ideological tendencies within the judiciary and its attempt to demonstrate its power in ‘special’ cases, as such.