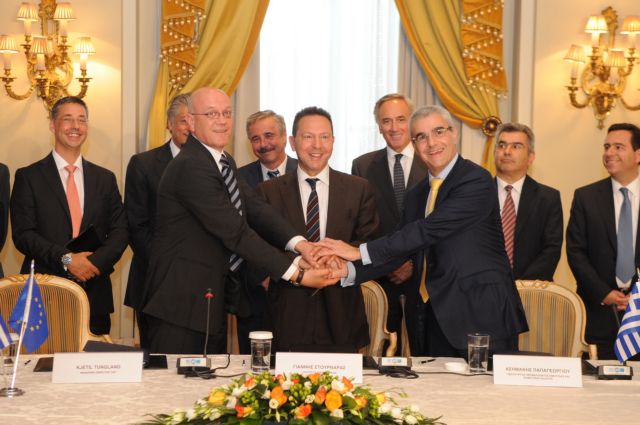 The host government agreement for the Trans Adriatic Pipeline (TAP) was singed last ngith at the “Grande Bretagne” hotel in down town Athens. The Greek government was represented by the Minister of Finances Yannis Stournaras, the Deputy Minister of the Environment, Energy and Climate Change Makis Papageorgiou and the Trans Adriatic Pipeline by General Manager Kjetil Tungland.

Mr. Stournaras was in high spirits and stated that “I believe this is a good deal and even as hear of IOVE I argued that this was the most beneficial solution for Greece” and added that “Greece is becoming an energy hub for the region if the TAP project is chose on Friday in Baku”.

On Friday the Shah Deniz joint venture, which is comprised from BP, Statoil, Total and SOCAR, will decided on which of the two proposed pipeline projects to pursue, the TAP or Nabucco West, with TAP being the most promising candidate. The alternative Nabucco West pipeline would cross through Bulgaria, Romania and Hungary. Austrian energy group OVM, which supported the Nabucco West, confirmed the decision in favor of TAP.

The TAP proposal is the favorite primarily due to its feasibility and commercial value. After it has formally been approved though, a number of technical details must be cleared up for the fund investment decision. The agreements for the Ionian – Adriatic Pipeline that will supply the Western Balkans (Montenegro, Croatia, etc…) and the IGB pipeline which will connect Greece with Bulgaria will also

The TAP will be about 870 kilometers long, 550 of which will be in Greece, 210 in Albania, 105 in the Adriatic Sea and 5 in Italy. The pipeline was designed to transport 10 billion cubic meters annually, however it can be upgrade with the necessary compressors to double its transfer volume.