Ruling New Democracy, precisely because it is in power, is obliged to present a comprehensive and cohesive plan that will link geopolitical choices with particular policies. 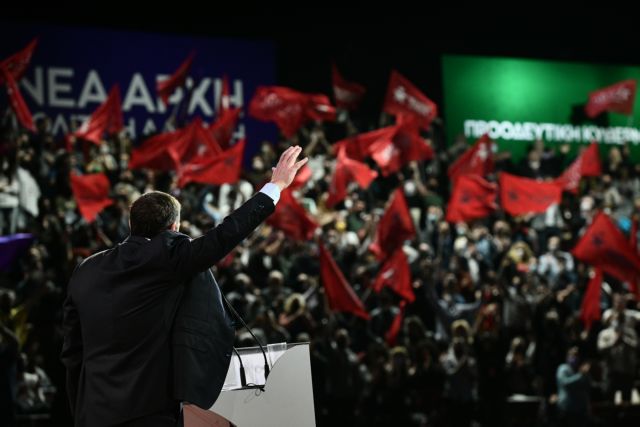 By coincidence, the three largest political parties that hope to come to power (either single-party rule or in a prospective coalition) have conducted or are organising their conventions amidst a combination of global public health, war, energy, inflationary, and economic crises.

Main opposition SYRIZA’s convention ended yesterday. It will be followed by ruling New Democracy’s (6-8 May) and that of centre-left KINAL, or Movement for Change, (20-22 May), whose new leader Nikos Androulakis (elected in December by the party base) is restructuring and aims for a rebirth of the party.

One might have characterised this as a propitious confluence of events and have expected of parties that have governed in the past to systematically and in an organised fashion carefully examine the multiple crises of our times.

One would expect them to engage in an in-depth analysis of the enormous changes wrought by these crises and to take a stand by tabling proposals and opting for truly national choices that are capable of mobilising the country and its people.

Understandably, due to extraordinary conditions expectations run high, especially since we are at the start of a political cycle leading to the next general election.

Yet, despite the demands of the times, SYRIZA’s convention did not veer away from the beaten path. It was dominated by the usual promises of handouts and was not able to substantially address the difficult combination of crises. Instead, it attempted simply to rally the party base ahead of the next elections.

Pledges of handouts and appointments to civil service jobs, such as those included in SYRIZA’s 2014 “Thessaloniki Programme”, were merged with some analysis of the current complex and demanding period.

The solutions, however, are not obvious. One cannot pull a rabbit out of a hat. The equation is multi-faceted and the policy mix is not self-evident.

Specific policies must be combined and coordinated so as not to cancel each other out.

SYRIZA’s convention was limited to a simplistic reading of new realities. It proved unable to transcend the old partisan syndrome of promises of handouts, despite party leader Alexis Tsipras’ declaration, “In order to change the country, we ourselves must change first.”

After that, the demands and expectations of the two other parties’ conventions have grown.

It would be impermissible for ruling New Democracy’s convention to turn into a mere festival of pre-electoral preparations.

The ruling party, precisely because it is in power, is obliged to present a comprehensive and cohesive plan that will link geopolitical choices with particular policies.

It must combine a growth model with protection of the more vulnerable classes and respond to demands for wage hikes, even as it takes into account inflationary repercussions. It must offer aid and subsidies without endangering fiscal stability.

Moreover, it must curb the unregulated operation of markets in the current wartime conditions.

Similarly, the ambitious KINAL party must redefine itself, opting for a complex mix of policies that will not negate its political tradition and characteristics.

Pledging allegiance to European Social Democracy will not suffice. It must engage in a deep process of analysis that can yield an attractive programme that is true to the party’s character, effective, and politically capable of serving convergences and prospective post-electoral collaborations.

We have entered a new era, and forthcoming, multi-faceted changes will cause geopolitical tectonic shifts. The resolution of outstanding crises will fashion a very different world.

Rarely in history have political parties been called upon with such urgency to prepare for and ensure the future.

Yet, that is precisely what is happening now, and that is why citizens demand so much of them.