AEGEAN: Prospects and new uncertainties for 2022

Capacity will gradually reach the bar of 2019 in the summer season, while the invasion of Ukraine causes uncertainty 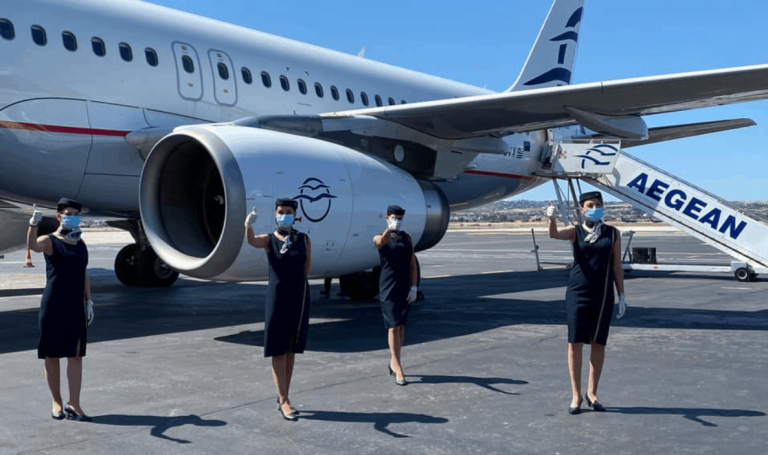 The upward trend of pre-bookings at the beginning of the year raises expectations for a positive recovery in 2022 for Aegean, but the Russian invasion of Ukraine creates new uncertainties. Rapid increases in fuel prices will have an impact on the company’s performance, with the consequences of the war in our European neighborhood still not being assessed. However, the deterioration of economic conditions, the reduction of purchasing power, but also the general feeling of insecurity can not leave air travel unaffected.

For Aegean, the start of 2022 was modest, as expected because of Omicron. From the beginning of the year until mid-March, the Group offered 33% fewer seats compared to those offered in 2019. Passenger traffic was 49% lower compared to 2019, while the average occupancy was reduced to 63%. At the same time, however, flight performance was higher than in 2021.

The strong demand for the Greek tourism product, after the positive image that the country built last summer, raised optimism. Greece has higher prospects for recovery than the rest of Europe, which of course means that the competition, which hit “red” last year, will at the same time intensify. But the Russian attack on Ukraine is putting a brake on the galloping expectations of the industry, which is now on hold.

Only 3% of Aegean’s traffic from Ukraine

The first direct consequence of the Russian invasion of Ukraine was the cessation of flights to both countries. However, this is not considered to have a significant impact on the performance of the air carrier, as they reflect a percentage of less than 3% of the total estimated passenger traffic this year. Respectively for the country they constitute only 2% of the arrivals abroad.

“In 2022, the industry as a whole expects a significant recovery, while the demand for the Greek tourism product seems particularly strong. At the same time, however, Russia’s invasion of Ukraine has created new significant uncertainties, while also having a significant impact on fuel costs. The Group has accelerated investment in new aircraft that reduce the impact of fuel costs and plans new destinations, new services and products, but also the gradual return of capacity to pre-pandemic levels for the summer. For the third consecutive year, due to the special conditions, the flexibility and the possibility of immediate adaptation to the changing market conditions will again be very important “, estimated Mr. Dimitris Gerogiannis, on the occasion of the announcement of the annual results for 2021.

The commitment to fleet renewal is stable

The beginning of the coronavirus pandemic coincided with one of the most important milestones in Aegean history to date. From the new dynamics developed by the Greek company with the receipt of the first of the total of 46 new Airbus aircraft, the pandemic brought the complete reversal. The numbness of the first months brought renegotiation of terms and a slowdown in receipts, but 2021 brought new conditions.

In 2021, therefore, additional differences in deliveries were agreed, maintaining the horizon of the investment program until 2026. What has been adjusted is the immediate deliveries for the next two years, in the context of the most immediate exploitation of the advantages offered by the new aircraft A320 neo.

In terms of forecasts for 2022, it is expected to be a transitional year in the field of fleet restructuring. By the end of the year, 11 new Airbus A320neo will be received, while the renewal of the propeller fleet will proceed.

Recently, the Group agreed on the early termination and return to the lessor of its 8 Q400 aircraft, whose initial lease contracts expired in June 2023. These will be returned to the lessor within the first half of 2022. At the same time, Aegean proceeded in an agreement for the purchase of 3 aircraft type ATR72-600, one of which has already been received and the other two are expected within the semester. In addition, it agreed to lease 6 additional ATR72-600s, two of which have already been received (one within 2021 and one within 2022). The remaining 4 are expected to be received within the first half of the year.

The arrival of new, more efficient aircraft will help improve unit costs. The results will be noticeable, as indicated in the annual financial report, from the first half of 2023, when the largest part of the fleet will consist of aircraft either new technology or with new more competitive conventional terms of use.

The modern capabilities of the new aircraft are another medium-term “antidote” to the exorbitant fuel prices, as they have reduced consumption. The engines of the new aircraft, Pratt & Whitney GTF, result in a 15% reduction in fuel consumption per flight and record 19% -23% less carbon dioxide emissions per passenger, compared to the previous generation Airbus ceo. At fleet level, these emissions correspond to a CO2 reduction of almost 50% per seat, compared to the AVRO RJ100 aircraft used by the company in 1999.

In any case, for the management of fuel risk, the company, as noted in its annual report, the Group enters into hedging contracts in petroleum products, which cover part of its estimated business needs. As of December 31, 2021, futures contracts were in force to cover 44% and 6% of projected needs for 2022 and 2023 respectively.

A significant increase of 63% was recorded in 2021 in the consolidated turnover of the Group, as a result of the recovery from June to October of the year. 70% of last year’s total sales were made during this time period, before the appearance of the Omicron mutation which again brought restrictions. Consolidated revenues amounted to 674.8 million euros in 2021 from € 415.1 million in 2020.

The Group offered 11.2 million seats and carried 7.2 million passengers in total, with traffic amounting to 3.5 million passengers on the domestic network and 3.7 million on the foreign network. The occupancy rate stood at 65.5% at roughly the same levels as in 2020 and significantly lower than usual before the pandemic.

With the completion of the share capital increase of 60 million euros in June, which was a condition for the rolling of state aid for the effects of the pandemic, Aegean received in early July 2021 the amount of 120 million euros for 2020. In the overall result of the year, the amount of aid reduced by the fair value of the warrants given to the Greek State was recognized.

In addition, an impairment provision was recognized in connection with the restructuring of the aircraft fleet. The total effect of the three aforementioned factors amounted to total non-recurring revenue of € 63.2 million, which is not included in the organic results for the year. However, taking into account, the losses before taxes amounted to 9.3 million euros in 2021, while the Group showed net profits after taxes of 5.1 million euros.

Cash, cash equivalents and other financial investments amounted to 474.4 million euros, following the payment of advances for the order of aircraft to Airbus as well as for the purchase of fixed assets, amounting to 94.8 million euros in the previous year.